The Flare, the Red Death, the Plague — how’s about reading some fictional pandemics during stay-at-home period? 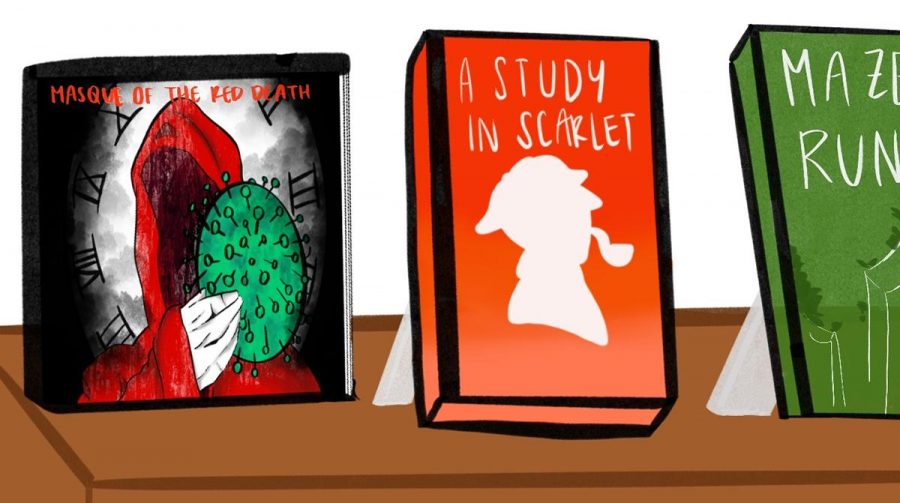 As Californians are headed toward the 10th week of stay-at-home orders, they may consider reading what past authors have written regarding fictional pandemics.

The books — The Maze Runner (2009) The Scorch Trials (2010) and The Death Cure (2011) — revolves around a group of teenagers fighting their way to make it through a dystopian society in which the Flare, a man-made disease released by the government as a form of population control, hinders their chance of survival.

In the first book, a woman describes the horrors of the Flare: “First the delusions start, then animal instincts begin to overpower the human ones. Finally it consumes them, destroys their humanity. … The Flare lives in their brains. It is an awful thing. Better to die than catch it.”

And is there a connection between the situation in the trilogy and reports that allege China having been involved in the COVID-19 release?

“In my opinion, COVID-19 [has] no connections to The Maze Runner because the Chinese government would not release a disease like this just to decimate their own economy,” said sophomore Ian Whedon, who read the books three years ago but has never watched the whole movie series. “Rather, it is more likely that this outbreak was a result of poor sanitation standards.”

Senior Daniel Kwon, who has never read the books but has watched the first two “Maze Runner” movies, agrees with Whedon.

Nevertheless, some do see a link between The Maze Runner and the coronavirus outbreak.

Sophomore Carolyn Tran read the whole series in middle school, and while rewatching the trilogy during the fourth week of April, she noticed something.

“When I was watching the third movie [“Maze Runner: The Death Cure”], there was this scene where everyone was outside in masks, and it reminded me a lot of what is happening right now with the coronavirus,” Tran said.

Stories about pandemics and their effect on the world have been written centuries before the first Maze Runner book.

All sophomores at Sunny Hills are required to read Edgar Allan Poe’s short story, “The Fall of the House of Usher,” and his poem, “The Raven,” in their consumable English textbooks. For those who enjoyed those two works of literature, they can consider reading his allegory on tuberculosis, which during his lifetime took the lives of Poe’s mother, wife, brother and foster mother.

Tuberculosis is a major threat like COVID-19, and its symptoms include chest pain, night sweats, cough (sometimes blood-tinged) and fever.

Similar to the coronavirus, it mainly weakens the lungs, according to mayoclinic.org. However, the tuberculosis bacteria eats the lungs from the inside out, slowly filling up the lungs with blood, which explains why one of the symptoms is coughing up blood.

The deadly disease was prevalent in the 19th century, killing one in seven people, according to pbs.org. Health officials encouraged everyone to get exposure to fresh air to help fight the disease, and people did whatever they could to do so.

In Poe’s “The Masque of the Red Death,” a character named Prince Prospero invites a thousand people to remain quarantined in his castle, which has been barricaded to prevent anyone suffering from a disease that Poe coined, the Red Death, to break in and infect the healthy ones.

During the guests’ stay in his mansion, Prospero decides to hold a huge party — a costume ball — containing buffoons, poets, ballet-dancers and musicians.

Known as the Stephen King of his time, the author also spends a considerable amount of time in his short story describing the contagion and its effect on human beings: “Blood was its Avatar and its seal — the redness and the horror of blood. There were sharp pains, and sudden dizziness, and then profuse bleeding at the pores, with dissolution.”

“The plague seems much more deadly than the virus that is currently afflicting us, and the ending is much more dark than anything we will see, I hope,” Wiegman said.

Besides “The Masque of the Red Death,” the instructor suggests that students read The Plague, which is more closely related to the COVID-19 pandemic.

Nobel prize winner Albert Camus, who was an editor and writer for a banned French resistance newspaper when he wrote the philosophical novel in 1947, sets the story during World War II.

The novel tells the story of a disease sweeping the French Algerian city of Oran, where Camus questions the nature of destiny and the human condition. The pandemic described in the novel is much deadlier than COVID-19.

“While I don’t agree with Camus’ existential philosophy, the novel is interesting as a comparison to the situation today,” Wiegman said. “In the novel, the town gets isolated from the outside world, somewhat as we see today.”

Camus also presents a number of different perspectives of how different people react to the plague — a doctor, a businessman, a journalist, a government worker and a priest, he said. This is very much similar to how different areas of work are reacting and being affected by the novel coronavirus.

Rather than constantly being reminded of the coronavirus crisis, students have turned to other genres to read during the quarantine.

The first Holmes book is about how the iconic detective duo, Holmes and Dr. Watson, meet and solve their first murder case together.

On the other hand, sophomore Krishna Thaker decided to soak in a coming-of-age novel, Perks of Being a Wallflower, by Stephen Chbosky, which covers the high school journey of an introverted, observant teenager who goes through many changes through the people he meets.

“It is a great book with a relatable story line and accurate portrayal of teenagers,” said Thaker, who read the book online a week after school closed down after hearing from others about the classic young adult novel. “People should read [at home] because it’s a perfect and productive way to spend your time during quarantine.”