May 3: Pop! There goes my chance to watch my K-pop boys at the Rose Bowl 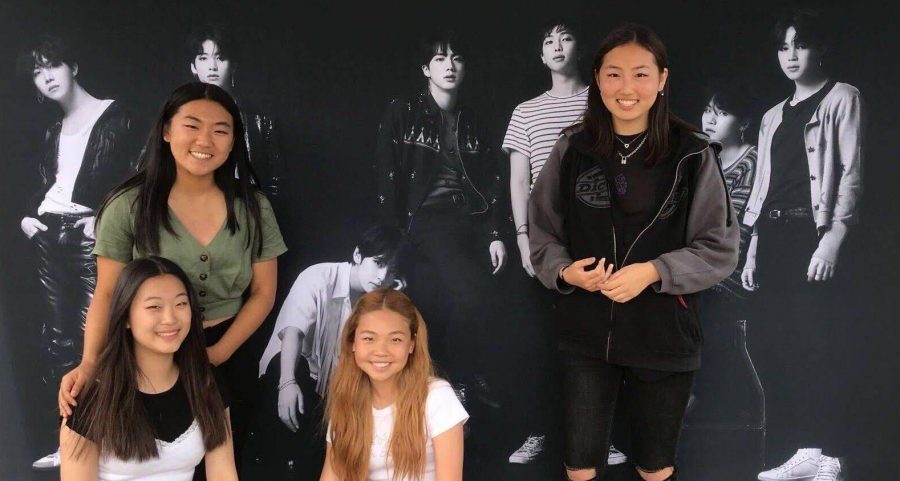 Sophomore Esther Oh (top row, left) and her Sunny Hills BTS ARMY friends get together in front of a banner of the band before the start of the May 2019 Love Yourself: Speak Yourself concert at the Rose Bowl in Pasadena.

LIVING UNDER THE CORONAVIRUS CRISIS

This is part of a series of columns about students’ various experiences during the school closure because of the coronavirus pandemic. If you would like to submit some of your experiences, please email us at [email protected]

When the word “K-pop” or “Korea” comes up in conversations, the boy band Bangtan Sonyeondan [BTS] is what I think of since it has broken various records with its music.

I first became a fan in mid-August of 2017 after deciding to give the K-pop genre a chance. Soon enough, I found myself becoming what the media have called, “the BTS ARMY.”

At first, I was extremely against Korean music for no reason and would get mad at my friends if they tried to get me to listen to or watch performances.

But one day, I decided to try it out as I was in a car on the way to Los Angeles. The boring drive led me to listen to a K-pop playlist on Spotify.

The first BTS song I listened to was “Spring Day” from the repackage of the band’s second studio album “Wings” called “You Never Walk Alone” released in 2017. The lyrics, which are about the feelings of missing someone and trying to do anything to meet them, and melody of the song caught my attention, leading me to listen to more of the band’s songs. After a couple of days, I had listened to its entire discography and eagerly waited for its next album release.

I remember excitedly telling my friends, who were already fans, that I had fallen in love with the seven members of the band and their music.

Through my newfound interest in BTS, I was able to meet other friends who had joined the BTS ARMY, short for Adorable Representative M.C. for Youth — specifically, three friends who are currently students at Sunny Hills. We bonded over the group and its music and attended two concerts together in the last two years.

I experienced my first BTS concert in September of 2018 at the Staples Center in Los Angeles.

The unexplainable, euphoric feeling during the two-and-a-half hour performance further solidified my love for the band, and when it was announced that BTS would be coming back for the Love Yourself: Speak Yourself tour in 2019, I instantly decided that I would go.

I looked forward to the day for months and finally last May, I was at the Rose Bowl in Pasadena.

Although my parents feel I don’t need to be as obsessed with the band as I am, they are not completely against this newfound interest and the money I’ve chosen to spend on it since I make sure to take care of all my responsibilities such as my school grades.

They definitely don’t mind that becoming a BTS fan has improved my Korean a lot since a majority of the group’s content is sung in Korean. I was always able to read, understand and speak the language, but I’ve gotten more comfortable with it from listening to BTS and have learned more vocabulary.

To continue my BTS concert attendance streak, my friends and I bought tickets in February for BTS’ Map of the Soul [MOTS] tour at the Rose Bowl in Pasadena on May 3.

On February 6, all four of us got on the ticketing website 30 minutes before tickets went on sale while calling each other; one of us got lucky enough to get tickets four minutes in. Each ticket was about $300, located in Row 20 of the stadium, but the price we paid was nothing compared to the anticipation for the concert.

The steep ticket price may seem to be a bit much for a nearly three-hour concert, but for fans like us, we are willing to overlook the cost to see our favorite artists perform. Every time BTS puts on a performance, the energy, dedication, quality and set are definitely worth more than what we’ve paid.

The genuine happiness that we shared after seeing the ticket information in our accounts was unexplainable, and all four of us were saying things like, “I can’t believe we got the tickets so fast.” But by late February, I read announcements of other artists’ tours being canceled/postponed through Twitter.

I sensed that the MOTS tour would also be postponed because of the coronavirus, and on March 27, BTS’ management company, Big Hit Entertainment, posted a notice on an app called Weverse: “The BTS MAP OF THE SOUL TOUR – NORTH AMERICA, originally scheduled to take place from April 25th to June 6th, will be rescheduled to a later date. All tickets will be honored for the new dates. Information on new show dates will be shared as soon as possible.”

Despite being prepared for the news, as soon as I read the announcement, I was beyond devastated — the day I looked forward to was postponed to months or possibly another year later.

I understand that the tour is postponed for the safety of the artists and fans, so I don’t feel angry or wronged. Since the tickets are valid for the postponed date — whenever that would be — I am still patiently waiting for this chance to watch my third BTS concert.

Big Hit Entertainment has posted no announcement regarding the possibility of seeking reimbursement, but I feel like the event organizer should give that option for those who cannot make it to the new concert.

If no opportunity is given to return the tickets for money in return, alternatives for ticket holders are to re-sell the tickets on ticketing sites or social media. But it isn’t guaranteed that the ticket will be sold and depending on the seller, the price of the ticket can be much higher than the original price.

To assuage many of the BTS fans like me out there, Big Hit Entertainment held a virtual event called BangBangCon, a marathon of concert footage from eight of BTS’ previous shows being livestreamed on the groups’s official YouTube channel, BangtanTV.

I stayed up to watch six of the eight shows throughout the two nights and honestly had the time of my life. All the footage were shows I’ve already watched before on my laptop, but it was more exciting to watch knowing that millions of other fans had also tuned in.

During the virtual concert, my friends and I were texting in a group chat and commenting on everything as if we were watching a live concert together.

Some of the texts that we exchanged was during the “2017 BTS Live Trilogy Episode III The Wings Tour The Final.”

Me: “This is my favorite song from this album.”

My BTS ARMY friend, sohpomore Elizabeth Kim: “Me too wow his voice sounds so good.”

Another BTS ARMY friend, sophomore Meghan Lee: “This is my favorite live performance ever.”

And my other BTS ARMY buddy, sophomore Tara Kim: “How do their bodies move like that?”

None of us dressed up or wore makeup as if we were actually going to the venue since we were wearing pajamas and were in bed, but we all had our ARMY Bombs, the group’s official light stick, and were cheering along with the audience on our screens.

Personally, I would much rather experience seeing the band in real life even if I have to go through the hassle of buying tickets and traveling to the venue, but a virtual concert was still worth my time to satisfy the disappointment in what happened with the postponed concert.

During self-quarantine, BTS has been uploading new pre-filmed footage through its YouTube channel and has constantly been posting, communicating and live-streaming band members’ lives during this pandemic on such social media platforms as Twitter, Weverse and V-live.

Their new docuseries, “Break the Silence” — airing twice a week — has been another opportunity for me to be more aware of what goes on backstage during world tours.

As I watch new and rewatch old content every day, I have become a bigger fan of the group because of how genuine and hard working its members are.

Meanwhile, I’m hoping that my boys would release a special song dedicated to us for standing by them and not demanding our money back for the indefinitely postponed concert; perhaps in the vein of, “Love Yourself … While in Quarantine.”