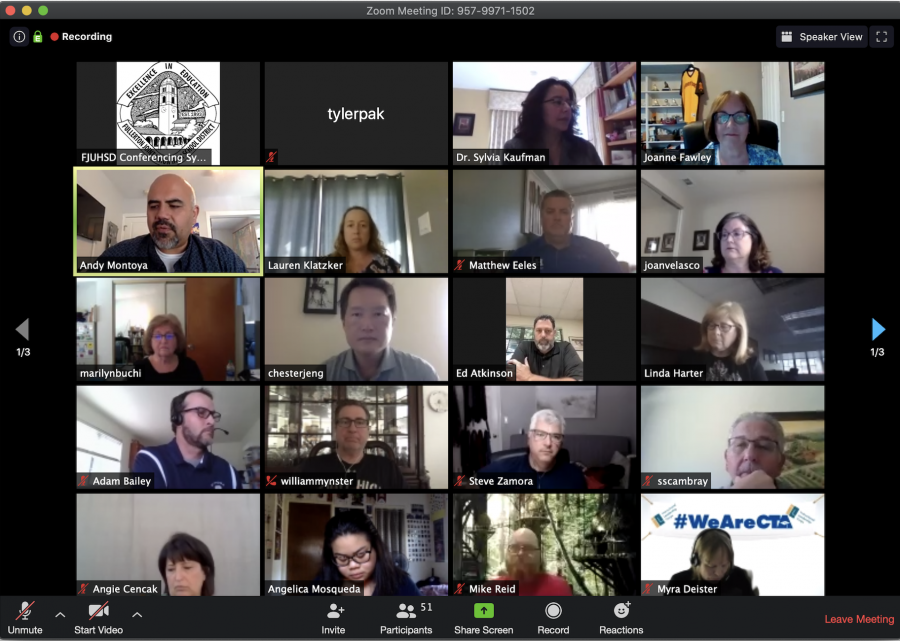 While trustees statewide are weighing their options for spring semester grading policy in response to school closures because of the COVID-19 pandemic, it took only 25 minutes for the Fullerton Joint Union High School District [FJUHSD] board members to unanimously adopt a modified letter grade scale Thursday, April 23, instead of just giving students a pass/no pass.

“Student Grading Guidelines shall be temporarily suspended during the period of school closure,” according to the adopted resolution. “The temporary modified uniform grading procedures will suspend the traditional grading scale of ‘A-F’ and replace it with grades of ‘A-C’ or ‘No Credit.’”

In addition, those letter grades will affect students’ GPA. Students who have less than 55 percent in a class at the end of the spring semester will not receive credit for that class, but it will not affect their GPA, according to the approved grading guidelines. Teachers also have the ability to create their own grading scales, though they cannot base their “C” grades below 55 percent.

The resolution will be effective immediately, which means that teachers in the district must follow the new grading criteria for the fourth quarter progress report, which will be available for viewing on Aeries some time after April 29, and final spring semester grades, which are due May 29.

Rather than meet in person, the FJUHSD board of trustees held the 4 p.m. special meeting through Zoom “in an effort to protect public health and prevent the spread of COVID-19,” the agenda read.

Before the trustees took the proposal to a vote, board president Andy Montoya read out loud the only comment from the public from Sunny Hills junior Andrew Ngo, who also attended the Zoom session with a few other students from Sunny Hills.

“Several California State University and University of California campuses have given students the option to select either conventional letter grading or credit/no credit grading,” Montoya read from Ngo’s statement. “In addition, the South Pasadena Unified School District is giving its high schoolers the same option. The South Pasadena district has had its new grading policy for nearly two weeks without issue from the California Department of Education. Could FJUHSD use the same system?”

No one immediately addressed Ngo’s concerns, but Montoya did open the meeting for discussion among anyone else in attendance.

That’s when members of the Fullerton Secondary Teachers Organization [FSTO] shared some background as to how they worked together with district officials to draft the resolution.

“I think this proposal is a good mid-ground for us, allowing our students that have worked really hard to see that reflect on their transcripts,” said FSTO negotiations chairman Mike Reid, a Troy computer science teacher.

Reid also addressed the issue that other districts grappled with as to how college admissions officers will look at students’ transcripts; officials from the Irvine Unified School District, for example, claim they have opted for pass-no pass for spring semester report cards because college officials will not be looking at applicants’ GPAs for this particular semester.

“Regardless of how anybody looks at these grades forward, you know, whether they just count it as credit or what, I think it’s important for our kids and their desire to continue to work hard to earn the grades they see on their transcript,” Reid said.

Trustee Marilyn Buchi, who’s been on the board the longest, then asked three questions for district officials or FSTO members to answer:

“The first one is a question whether any parents or students were involved in the grading [policy] decision; the second one is what is the rationale for the moving of a D to a C when my understanding is a D is a passing grade and my third question is at what point, and is it the student that gets to decide, but at what point is the decision made to go credit-no credit or the grades — at what point in the semester?”

Assistant superintendent Sylvia Kaufman pointed out that the Orange County Department of Education and district lawyers indicated that the district has the option to work with teachers only in drafting a resolution about grading policy.

“At no point does it indicate that there’s supposed to be student or parent input,, and those were very specific questions we asked at the very beginning,” Kaufman said.

She then went on and explained that college admissions officers would consider “D” grades not passing, addressing Buchi’s last question by saying, “That’s not on the table.”

Trustee Joanne Fawley, who’s also a social science teacher at Cypress High School in Orange County, highlighted the importance of getting rid of a D on students’ transcripts.

“For college admissions, a D is not considered acceptable and so eliminating the D does recognize … the inequities and challenges that arise in such an unusual situation [with school closures because of COVID-19],” Fawley said.

Before that, Reid had chimed in again to address Buchi’s concerns about parent input over the proposed grading policy change to A-C with no credit for anything less than 55 percent.

“Although not officially involved in the conversation, there was parent feedback,” said Reid, who mentioned his wife as being president of the Fullerton Council PTA. “The overwhelming thing that I heard back from parents was, ‘Our kids work hard for these grades, and we want to keep them.’ They were very much against going to a credit-no credit.”

Before the vote tally, trustee Lauren Klatzker, who has a son attending Sunny Hills, commended the student emails she had received regarding the proposed new grading policy.

“It was really wonderful feedback to hear from them, and I love that our kids in our district feel empowered to reach out to us to speak their minds and to let us know how they feel,” said Klatzker, who did not go into detail as to the contents of those student emails.