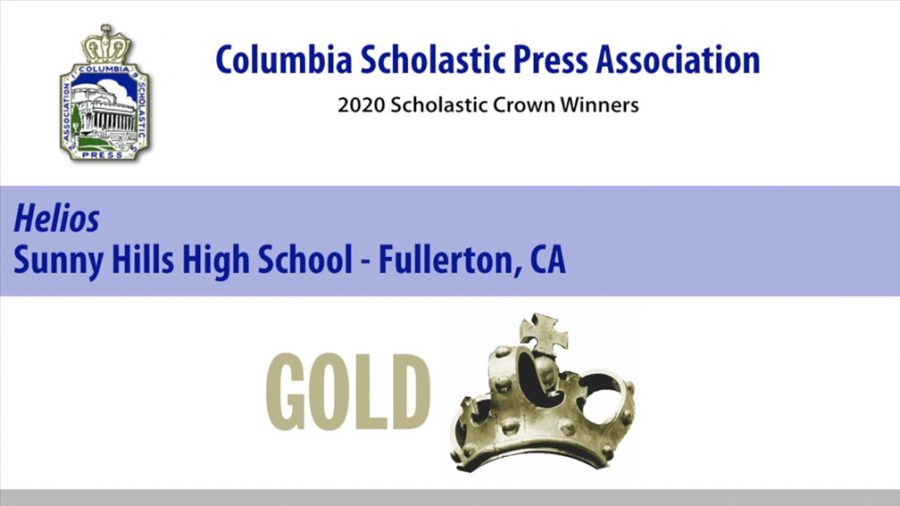 A screenshot of the online video awards presentation by the Columbia Scholastic Press Association recognizes the 2018-2019 Sunny Hills yearbook with its highest honor, a Gold Crown.

The Helios staff that produced the 2018-2019 yearbook has been awarded a Gold Crown — the highest honor — from the Columbia Scholastic Press Association, while the 2018-2019 Accolade received a Silver Crown.

“We were all ecstatic about winning the Gold Crown because we put a lot into that book, and we know how much our previous editors did, too,” said senior Olivia Hur, who was the yearbook’s academics section editor last year and is this school year’s co-editor-in-chief. “We were really proud of the book, and being recognized for it was really amazing.”

According to a slide awards presentation posted on March 20, the CSPA judges — many of them former journalism advisers and professors — recognized the yearbook, themed “What are you looking for? It’s all here,” as having “the complete visual-verbal package.”

They mentioned that the “theme page captions, pull quotes, mini indexes and quick reads make the index an essential part of the coverage.”

It was the first time since 2004 when English teacher Suzanne Boxdorfer was yearbook adviser that Helios won a Gold Crown.

“Year after year, these kids work incredibly hard to produce a book the student body will love full of great photos, personal stories and eye-catching designs,” said yearbook adviser Lindsay Safe of her first time winning the top CSPA award. “To be recognized for that means the world to us.”

Winning this award made Helios co-editor-in-chief senior Kaylee Kim understand that last year’s staff produced one of the best annuals in the United States — the CSPA actually handed out 13 Gold Crowns out of 56 Crown-nominated yearbooks.

“It felt amazing to win a Gold Crown, especially because we won with a book that holds such a special place in my heart,” said Kim, who was the yearbook’s copy editor last year. “It was the first book that I played a big role in making, and I made it together with some of my favorite people in the world.”

The CSPA also handed a Silver Crown award for the six print issues of The Accolade from the  2018-2019 school year.

“It’s really hard to get a Gold Crown for print newspapers, but last year’s staff, as well as those who are on this year’s staff who contributed to last year’s print newspaper issues, should be very proud of even being recognized at that level,” said The Accolade adviser Tommy Li, who last guided the school newspaper staff to earn its first Crown nomination in the 2005-2006 school year. That also resulted in a Silver Crown during the 2006 awards ceremony.

“One of my top goals upon returning as adviser was to bring The Accolade back to a national award-winning program, and I didn’t expect we’d be able to do so in that short amount of time compared with when I was adviser the first time around,” said Li, whose other goal is to eventually earn a Pacemaker award from the National Scholastic Press Association. “It just goes to show the increased hunger for excellence that we have among my journalism students this time around.”

The Accolade adviser’s other hope is that more students on campus will consider joining either newspaper or yearbook so they can continue both programs’ award-winning traditions.

Back when The Accolade received its first Crown award, its issues were submitted for judging in the broadsheet category — the size of the newspaper. But 2018-2019 editor-in-chief, Noah Somphone, chose to change the print publication’s dimensions to a tabloid size, which is the same as this school year’s issues.

According to the CSPA, only six print newspapers were awarded a Gold Crown out of 25. The Accolade submitted six issues from the 2018-2019 school year for judging, and judges said that The Accolade was notable for “strong writing and reporting.” They also mentioned that the “content is diverse, ledes are engaging, stories are balanced and quotes are meaningful.”

“To be even nominated for this award was an honor,” said The Accolade editor-in-chief senior Michelle Buckley, who was a co-editor for the Arts and Entertainment section last school year. “This award is a guarantee that our hard work doesn’t go unnoticed.”

The top editors and advisers of both publication staffs were supposed to fly to New York March 17-20 to receive the awards in person at Columbia University, but CSPA officials canceled the journalism convention and awards ceremony because of COVID-19 concerns. Since then, New York has become the epicenter of the coronavirus pandemic.

CSPA officials then opted to stream the awards ceremony March 20 with a slideshow through its Twitter account and via Vimeo.

“I want to especially thank our principal for giving me and three of my top student editors the opportunity to attend the ceremony in New York even though that got canceled because of coronavirus concerns,” Li said. “But I’m sure that my staff and I are grateful for that gesture of support for our journalism program.”