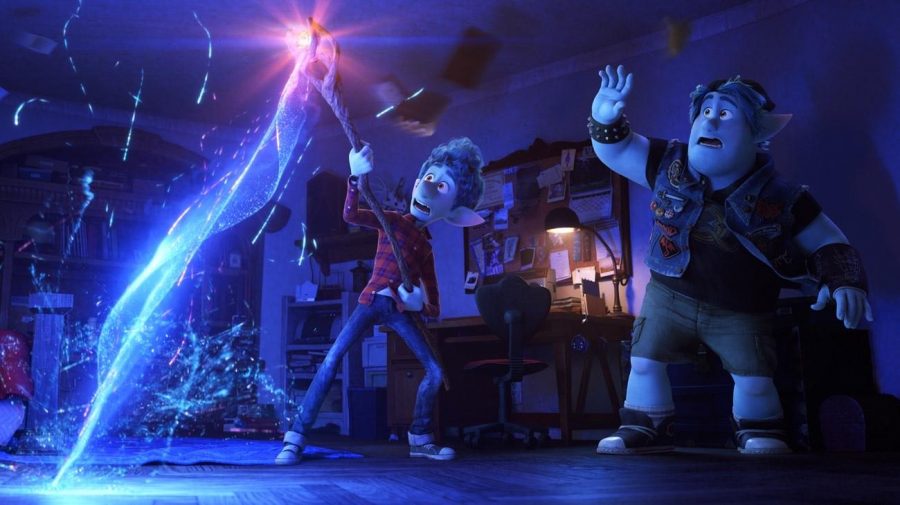 Tom Holland of Marvel's Spider-man voices Ian Lightfoot (left), who chants a visitation spell and uses a Phoenix Gem and a wizard's staff to bring back his father while his older brother Barley watches. This incites the brothers' fantastical quest to find another magical gem to complete their task to resurrect their dead father. Image used with permission from Disney Studios.

On younger brother Ian’s 16th birthday, mom Laurel Lightfoot (Julia Louis-Dreyfus, “Downhill”) presents to the siblings their father’s wooden wizard staff since the boys are both older than 16.

Their father, Wilden Lightfoot (Kyle Bornheimer, “Amazing Stories”), died before Ian was born, and included a Phoenix Gem and a “Visitation Spell” for the boys so they could see and talk to him in the flesh again.

But as with any fantasy genre, a catch is involved: The spell only works for 24 hours.

When the Phoenix Gem fails to bring back all of Wilden, the two boys and their dad’s lower body (from the hip down — don’t worry, pants, socks and shoes are included) set off on a quest to find another Phoenix Gem.

Ian sets a 24-hour timer on his watch and leaves a note for his mom, “BE BACK WITH MIND BLOWING SURPRISE.” When Laurel finds the note, she follows the boys, adding another story line to the movie. Yet another is added when her centaur boyfriend, Officer Colt Bronco (Mel Rodriguez, “The Twilight Zone”), tags along one step behind.

Here we have yet another catch: The surprise isn’t all that “mind blowing.”

Instead, “Onward” foreshadows the boys’ final obstacle early on into the film, and the audience can predict what their final challenge will be.

Although the movie has a more straightforward plot than Pixar’s other works like “Coco,” the film’s plot is only unique when viewers compare it to Pixar’s previous films. Apart from being Pixar’s only fantasy film about elves finding their dad with half of their dad, the audience will get “Incredibles” vibes as Ian and Barley work out their sibling relationship and learn to trust each other.

Viewers will also recognize and relate with Ian’s teenage trouble with merging onto freeways when the younger sibling is forced to go behind the wheel of Barley’s van while on their quest.

Another familiar aspect viewers can relate to is Ian’s cliche relationships at school and with his family.

Ian’s teenage awkwardness in New Mushroomton High School’s social culture is apparent, yet too unrealistic. On the other hand, his embarrassment upon Barley’s picking him up from school in Guinevere — his rickety van named after the queen from the Round Table — is much more relatable.

At least Pixar’s CGI has improved since “Toy Story,” and the characters’ movements, clothing and their setting are realistic, even if elves don’t exist in real life.

The real connections to reality lie in the film’s satirical emphasis on how technology has not only changed this world, but also in the world of “Onward.” The opening exposition describes how in the past, more creatures traded magic, a difficult skill, for new advances in science like the light bulb.

This idea of a more modernized, electronic and distant world prevails in the trailer as well, with the mermaid in a kiddie pool instead of an ocean and the gnome telling a garden gnome to keep working.

At least in the film’s universe, they still read newspapers.

Appearances from creatures such as mermaids and gnomes remind the audience that this isn’t reality, though.

In the movie, Barley is an avid Quests of Yore player and believes the RPG is historically accurate. He has a campaign set up and owns a collection of figures, monsters, cards and handbooks to prove it. One of his friends even encounters a green gelatinous cube, a popular Dungeons and Dragons dungeon master, as a monster.

The references don’t end there. When Ian goes to Burger Shire to pick up breakfast, “Lord of the Rings” and “The Hobbit” fans in the audience will notice the restaurant sells “second breakfast,” one of a hobbit’s six meals of the day.

Pratt’s Barley will invoke memories of another film franchise with his Guardians of the Galaxy-esque mixtapes that accompany the Lightfoot brothers for most (no spoilers) of their adventure. Impressively, the rock music doesn’t just serve as an energetic backdrop for their quest, but also as a melancholy accompaniment (“Rise to Valhalla” in the movie is “Sacrifice” on the actual soundtrack) to the brothers’ farewell to a friend later in the film.

The rock music provides an energetic backdrop for their quest while Barley provides the comedic relief.

The end credits song, Brandi Carlile’s “Carried Me With You,” mirrors Ian and Barley’s relationship through the movie. The audience will gain a deeper understanding of their brotherhood even after the movie ends, as Carlile croons, “I got your back and you got mine / if you bear a heavy load / I’ll be your wheels, I’ll be the road.”

Although much of “Onward” is cliche, the film’s intertwined storylines keep the audience engaged and attentive to its light suspense. Teenagers in the audience, especially, will appreciate the movie’s take on redemptive relationships between siblings.