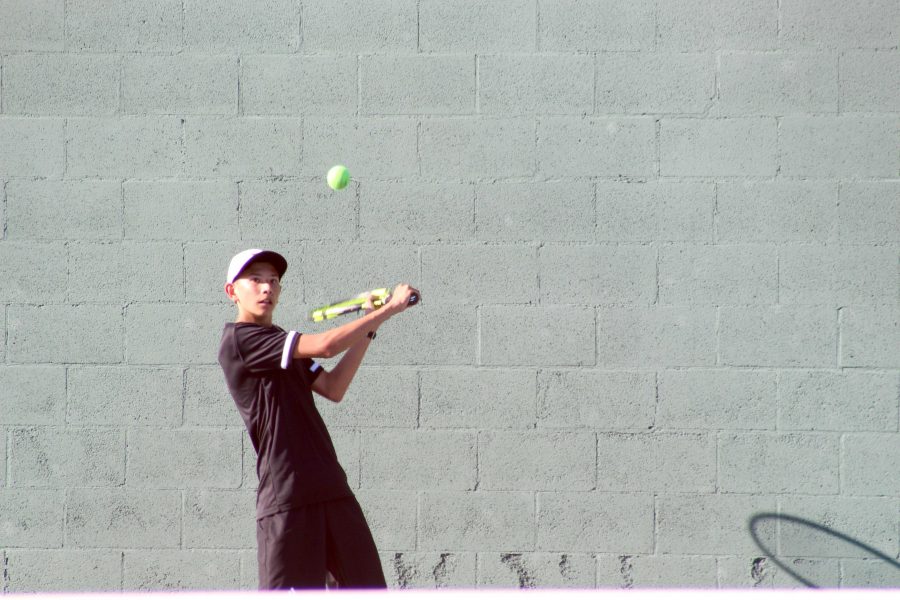 Boys tennis singles player freshman Owen Taylor prepares to hit a backhand during a March 3 match against Whitney. Taylor aims to play in the April 21-26 Ojai Tournament, but concern over how to stop the spread of the coronavirus has the event's status in jeopardy. Image taken by Accolade photographer Brianna Zafra.

The March 17-18 CIF State annual spring meeting in Sacramento could shed light on the fate of the spring sports season in light of what Southern California schools have decided to do in halting athletics competitions for at least these next two weeks to combat the coronavirus pandemic.

While the media statement only mentions that post-season events will be discussed, concern on whether CIF officials will take the next step and end athletic competition for the rest of the school year has risen among athletes, coaches, parents and local media.

“If the ban on athletics extends into April, there is a strong possibility the spring sports season will be canceled entirely,” high school sports writer Steve Fryer wrote in a March 13 online article for the Orange County Register.

As of now, that decision will rest with each school district rather than the governing CIF-Southern Section body, said CIF-SS commissioner of athletics Rob Wigood in a separate March 13 news release.

Should CIF State follow the lead of its collegiate counterpart, the NCAA, then the CIF playoffs for spring sports will not be held at the end of this semester.

Shortly after athletic conferences across the country suspended their basketball tournaments, the NCAA announced that its men’s basketball tournament leading up to the Final Four in Atlanta would also be canceled on March 12. On March 14, the NCAA canceled all spring sports playoffs as well. Later that day, the Pac-12 conference canceled all athletic events for the remainder of the academic year.

Track and field hurdler junior Josh Choe said he’s been unsettled about how the coronavirus threat has impacted him.

“At first, it felt nice to take a break [from athletic competitions],” Choe said. “But not being able to practice and improve my times, plus the chance that the entire season may be canceled is kind of scary.”

The looming possibility that the virus threat will cancel the spring sports season has also brought up a concern by parents of student athletes.

“The [swimmers] practice every day before season,” said Kaiyan Wang, mother of swimmer freshman Merci Liang. “It [would be] sad to see all of their hard work go toward nothing, [especially] considering [Freeway] League meets haven’t even started yet.”

In what may be a predecessor to the entire spring sports season, other significant athletic events that Sunny Hills athletes would have participated in have already landed on the chopping block.

The Sunny Hills baseball team was scheduled to play against Western of AUHSD at Angel Stadium for the second straight year on March 25, but neither team will be allowed to play because of the suspension on athletic activities and California Gov. Gavin Newsom’s ban of assemblies of 250 or more people.

“I felt pretty bummed [about the news] because they only beat us by one last year,” catcher junior Abraham Campos said. “We knew we could beat them, and it [would have been] on a [professional baseball] field, which is great.”

Organizers of the Ojai Tournament scheduled for April 21-26 will meet Sunday, March 15, to discuss whether the 120th edition of the tennis competition will be held.

“I was looking forward to the opportunity to play against high-ranked players at Ojai,” said boys tennis player freshman Owen Taylor, one of two singles players on the varsity squad vying to be the first Lancers in the tournament since 2016. “But I would understand if [the tournament] was canceled because of coronavirus.”

Update (March 16 4:54 p.m.): This year’s Ojai Tournament has been canceled for the first time since World War II.

Follow @AccoladeSports on Twitter to receive the latest updates on the coronavirus threat and its impact on Sunny Hills sports.