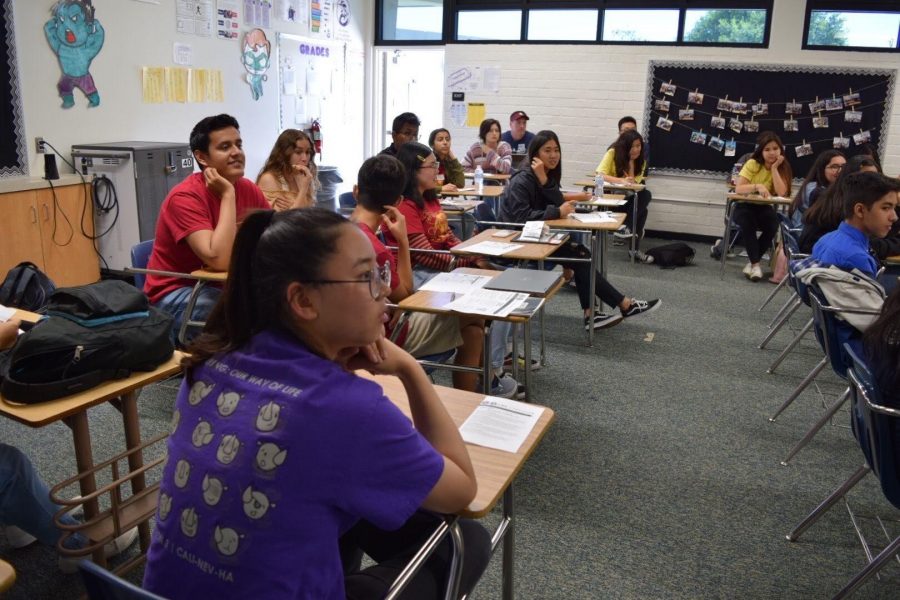 And it was awarded CNH District of Key Club International’s Club of the Year last school year.

“[Our] goal is to raise money for our preferred charities,” said science teacher David Kim, who has been adviser of Key Club for about six years. “For our division, [which is] Division 30 North in Region 3, we raise money and donate to the Pediatric Trauma Program.”

The 39-member group is supported by the Kiwanis, an international service organization founded in 1915 that aims to assist children using local clubs all over the world. Kiwanis created some sponsored leadership clubs with one of those being Key Club to help people “develop the heart to serve, answer the call to lead and accept the courage to engage,” according to keyclub.org.

“I feel like the core values are pretty much embedded in the events and activities we do,” Lee said. “It’s something we talk about at our first meeting when we do a Key Club 101 presentation.”

The group follows the four core values during its meetings and events while preparing for upcoming events that members could participate in to earn volunteer hours, apply for scholarships and awards and participate in regional events.

“[The members] listen to what we have to say about information regarding division events and things that our region, district or even international are doing,” Kim said.

Key Club also organizes bake sales, ice skating and roller skating fundraisers. Some community services that club members can participate in are Meals on Wheels, Rose float decorating and Plymouth Run, which is a Thanksgiving 5K service event that involves helping at booths such as water stations.

Other organizations the club works with are March of Dimes, UNICEF and Children’s Miracle Network, Lee said.

After gaining service hours from events throughout the year, the club submits the hours to the district convention [DCON] for various awards. DCON consists of Key Clubs from California, Nevada and Hawaii and is usually held in March with the meeting location changing each year..

“Last year, we got the Club of the Year award because we really improved as a club in comparison to other clubs in the district,” said Kim, who has been adviser for six years. “We were proud that our club was finally recognized for all the hard work and time we put into events over the years.”

Not only do the members participate in many events and serve the community, but they also build different skills and values such as teamwork, compassion, inclusiveness and leadership.

“I think Key Club is a really great organization, and they support good causes,” said Kim, who also earned Club Adviser of the year in September 2019, which was given by the Rhino division lead. “I hope to see [the members] grow into better leaders.”

When Lee joined the club during her sophomore year and attended a training conference Oct. 2017 for the first time, someone in the club reached out to her first since she was a new member and did not know anyone.

“I wanted to become the president to become the person [who] reaches out to people and makes them understand why Key Club is like a family and fall in love with it like I did,” she said.

Junior Daiana Garcia, a member who joined Key Club this school year, found out about it during Club Rush and decided to join.

“Joining Key Club was a fun way to do both community service and being involved at school, so that influenced me to join,” Garcia said. “What I like is that I get to meet other Key Club members from different schools and divisions.”

Sophomore Jasmine Lee, another member who joined Key Club this school year, saw that the club had a fun high-spirited energy, which motivated her to join.

“I’ve participated in the fall rally, bake sales and picnics, where we sew blankets for the homeless,” Jasmine Lee said. “I think it has helped me branch out as a person and I met a lot of people through these events.”

Key Club meets every Monday during lunch in Room 82.