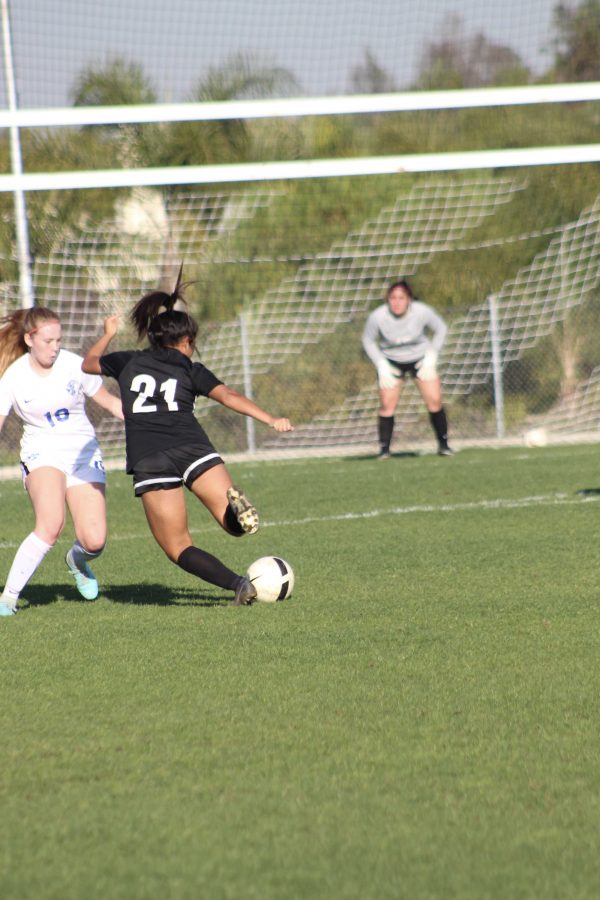 Midfielder senior Meghan Legayada attempts to fires the ball toward the goal during a 5-0 blowout against La Habra Jan. 29 at the Sunny Hills field. Photo taken by Accolade photographer Brianna Zafra

“It was a perfect game,” head coach Jeff Gordon said. “We had more than three goals and had a shutout.”

The team took the lead when forward senior Auburn Burnett scored on a header off a corner kick from midfielder junior Acira Mehta about 20 minutes into the game.

“When Acira crossed me the ball, I could see that I was open on the back post,” Burnett said. “I was composed and headed the ball in.”

As the game progressed with neither side scoring, defender senior Zoey Ip added to the Lady Lancers’ lead by making a goal through a penalty kick.

“We practiced penalty kicks a lot,” Ip said. “I felt pretty good in taking the kick to score.”

During the first six minutes of the second half, Burnett headed in her second goal from a cross by forward sophomore Anika Osbourne.

“[When] Anika crossed me the ball, I knew I was wide open and just had to head the ball in the corner,” Burnett said. “It was a very well-placed cross.”

Then, 18 minutes into the second half, Mehta made her first goal of the season with an unexpected Olympic goal, which is a goal scored off a corner kick without contact by any other player.

“When it went in, I was in shock, and everyone was surprised [because] no one expected it [to go in],” she said. “I wasn’t aiming to score. I was just trying to cross it to my teammates for a header.”

Gordon commended Mehta’s performance on the field on that scoring drive.

“Acira’s Olympic goal was amazing,” he said. “Scoring directly from a corner kick is one of the hardest things to do.”

As only six minutes remained, midfielder sophomore Leilani Chhoeung made a pass to forward senior Trinity Hernandez, who scored the last and fifth goal of the game with a left-footed shot over the goal-keeper.

“The key to our success is that we played with intensity,” Gordon said. “We scored early and had no goals against [us].”

The Lancers have only two league games left, and winning both will earn the team the Freeway League title. The first of those two games will be Friday, Jan. 31, against Fullerton at 7 p.m.