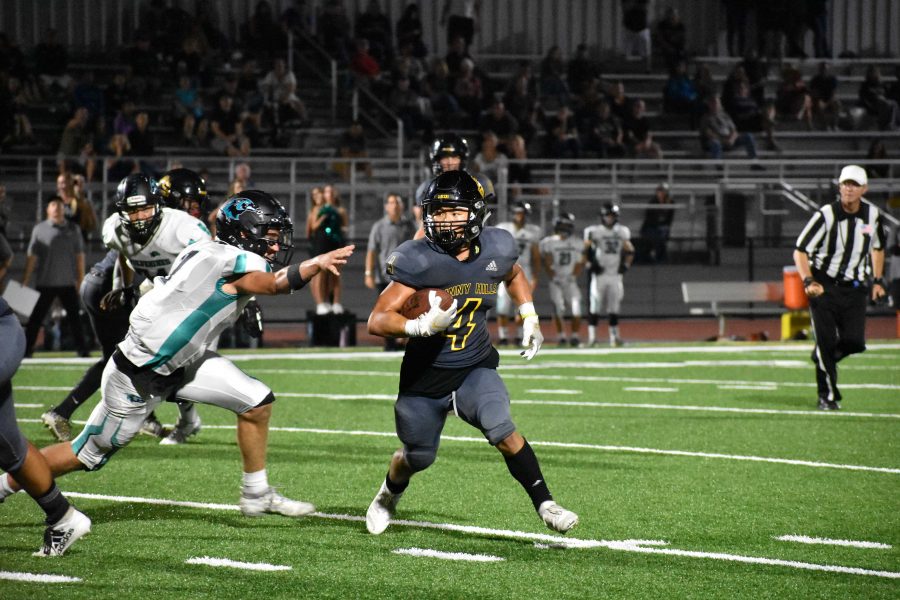 Running back and defensive back senior Jun Ahn carries the football in the red zone during the season opener against Aliso Niguel Aug. 30 at Buena Park High School stadium. Ahn has committed to playing Division 1 football at Drake University in Des Moines, Iowa, where he will major in kinesiology. Photo taken by Accolade photographer Paul Yasutake

Coming into high school, he knew nothing about football. However, three varsity seasons and a CIF-Southern Section Division 8 championship later, he’s looking forward to his future athletic and academic plans.

“I was encouraged to join football through my cousin’s friend,” running back and defensive back senior Jun Ahn said. “I had never thought about [winning the CIF title] or anything else.”

Ahn capped off his final season at Sunny Hills by committing Dec. 9 to a Division 1 football program at Drake University in Des Moines, Iowa, where he will major in kinesiology.

“I chose Drake because it was the best school academically and athletically,” Ahn said. “Education is always first to me, [and] football is just a bonus.”

Through four demanding years of training, Ahn has amassed 3,393 rushing yards and 44 rushing touchdowns on offense and 39 tackles on defense.

He was also the 2018 rushing leader in CIF-Southern Section Division 7 and currently holds the Sunny Hills record for most carries in a game at 36.

Following his senior season, Ahn earned All-Freeway League honors Dec. 24 and was selected to the All-Orange County Third Team Dec. 20 and to the Jan. 25 61st Annual Orange County North vs. South All Star Game, where he will play alongside two of his teammates, seniors Wilson Cal and Luke Duxbury.

“I want to attribute my success to my coaches and parents who motivated me and pushed me to be better,” he said.