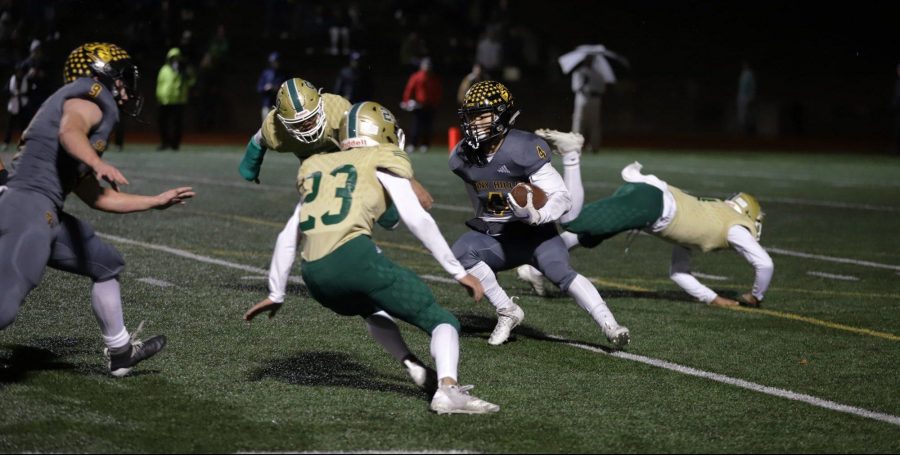 A shorter recap is available on this story.

Update: The story was updated Dec. 9 at 11:00 a.m. to change the number of total CIF championships won by the team from three to four.

For the Lancers’ 2019-2020  football season, it wouldn’t be a Sunny Hills playoff win without a comeback.

In two of the first three Lancer CIF-Southern Section Division 8 playoffs this season, Sunny Hills (12-2, 4-1 Freeway League) had been trailing in the fourth quarter — 14-7 to Tustin in the first round and 27-24 to Trabuco Hills in the semifinals — before late touchdowns and defensive stands sent the team to the next round of the playoffs.

And the cardiac kids faced a deficit again during the Nov. 30 championship game against the Santa Barbara Dons at San Marcos High School stadium.

Third down runs from quarterback senior Luke Duxbury and running back and defensive back senior Jun Ahn pushed Sunny Hills all the way to the Santa Barbara two-yard line. But a goal line stand from the Golden Tornado — an alternate nickname given to Santa Barbara High School football playoff teams — forced the Lancers to settle for a 22-yard field goal from kicker freshman Mathias Brown.

With the Lancers up 3-0 with four minutes and 10 seconds remaining in the first quarter, the Dons started their first offensive series of the game from their own 35-yard line after the kickoff.

Led by three-star quarterback junior Deacon Hill, a University of Wisconsin commit, the Dons led an offensive attack through the air and drove all the way to the Sunny Hills 12-yard line at the end of the first quarter.

“Most quarterbacks we play can’t make certain throws, but we knew [Hill] could make any throw anywhere on the field,” Sunny Hills head football coach Peter Karavedas said. “If we gave him only one look [coverage-wise], he would beat us, so we had to make adjustments throughout the game.”

A few plays later, Hill pushed into the endzone on a quarterback sneak to put the Golden Tornado up 7-3 with 10:26 left in the first half.

On the ensuing drive, Sunny Hills was unable to muster another sustained drive and so after three downs, it called on punter junior Dominik Geib to kick the ball away to Santa Barbara.

Hill then punished the Lancers again with a 20-yard touchdown pass to his brother, wide receiver senior Dakota Hill, putting Santa Barbara up 14-3 with a bit over six minutes left before halftime.

The Lancers and Dons traded punts for the next three drives before setting Santa Barbara up at the Sunny Hills 39-yard line with 43 seconds left in the half.

With six yards needed for a first down, the Dons’ head coach decided to go for it on fourth down, and Hill was able to convert on a pass completion. But the team was unable to capitalize on that drive as Hill threw up a Hail Mary at the end of the half with the pass falling to the ground and outside the reach of any receivers in the area, ending the first half.

Down 14-3 coming out of halftime, it took no time for the Lancers to make a big defensive play.

“We’ve been down before,” wide receiver and defensive back senior Wilson Cal said. “We didn’t change much [at halftime]; we just had to keep working.”

Less than two minutes into the second half, a Sunny Hills defensive lineman, junior Kenny Lathrum, snatched a Deacon Hill screen pass out of the air to set up the Lancer offense at the Santa Barbara 41-yard line.

“The only thing going through my head was don’t drop the ball,” said Lathrum of the interception, which was also the first of his career. “It felt good to get all of the energy back into the players and crowd and shift the momentum.”

Only up 14-10 and the rain coming down again after a brief respite, the Dons made it to midfield thanks to a big rush from running back and defensive back junior Ty Montgomery, but the Golden Tornado was forced to punt for the second time of the night.

Starting from its own 20-yard line, the Sunny Hills offense faced a penalty and a negative run that set up a third down and 21 in which a Santa Barbara defensive back nearly intercepted a Duxbury pass.

Geib punted again, setting up the Golden Tornado at midfield with five minutes remaining in the third quarter.

On an especially long play timewise, a Sunny Hills trio of linebacker junior Kevin Hu, Lathrum and linebacker sophomore Dylan Lawson converged on Deacon Hill for a 10-yard sack, forcing a Golden Tornado punt on fourth down and 15 with just under two minutes remaining in the third quarter.

“We knew we were down so we had to make a big play,” Hu said.

And so they did. On their next offensive series, the Lancers marched down the field to the Santa Barbara five-yard line before calling their first timeout of the second half with seven and a half minutes left in the game.

The timeout proved to be successful as Duxbury — on third and goal — lofted a pass to the right side of the endzone where Silva was waiting for his second touchdown of the game, giving Sunny Hills its first lead since the 10 minute and 26 second mark in the second quarter.

The Golden Tornado offense, now facing a 17-14 deficit, powered down the field with a strong run game and accentuated the drive with a 29-yard touchdown run up the middle from Hill, putting the Dons ahead 21-17 with 4:42 remaining, much to the pleasure of the many Santa Barbara fans at the stadium.

With the script now flipped, Duxbury and the Lancer offense were tasked with yet another game-winning drive — something they had become very familiar with as seen in their playoff wins against Tustin and Trabuco Hills.

It did not take long before they faced a fourth down at the Sunny Hills 44-yard line with the game — and the season — on the line.

To earn a first down, the Lancers needed two more yards, and so Duxbury put the ball into the hands of Ahn, who entered the game with 26 rushing touchdowns and just short of 1,700 rushing yards.

Several Santa Barbara defenders were able to reach Ahn while he rushed to the left side of the offensive line, but the running back pushed forward and moved the chains for the Lancers.

On the very next play, Duxbury launched a deep pass to a streaking Silva, who ran into the Santa Barbara endzone for a 58-yard score and the second Duxbury-to-Silva touchdown of the night, prompting those on the Lancer bleachers to erupt into cheers.

“That touchdown felt insane,” said Silva, who finished the evening with three touchdowns and 135 all-purpose yards. “Words can’t describe it, but we knew that we could win that game.”

Now up 24-21 with just one minute and 38 seconds left in the game, the Lancer defense had to make one last stop — just as it did in Sunny Hills’ 31-27 win over Trabuco Hills eight days prior.

A big kickoff return put Santa Barbara at its own 42-yard line to start the potentially game-winning drive with less than 90 seconds in the game, and the Dons had already burned all three of their timeouts, limiting their ability to stop the clock.

A series of quick passes moved the Golden Tornado offense all the way to the Sunny Hills 20-yard line with 38 seconds left.

Deacon Hill, whom the Sunny Hills defense held to just 163 passing yards on 16 of 29 passing and one passing touchdown, went for the win and slung a ball to Golden Tornado wide receiver junior Jake Knecht in the endzone.

But Cal jumped in front of Knecht for the game-clinching interception.

“I knew that as soon as the ball fell into my hands, we had a ring on our fingers,” he said.

Thirty seconds and a quarterback kneel later, the Sunny Hills players rushed the field to celebrate the team’s first CIF title since 1992 and just the fourth in Lancer football history.

Ahn carried the load for the Lancers offensively, running for 142 yards on 30 carries, and putting him over 1,800 yards on the season.

“I had never thought of the idea of any of this happening to me,” he said. “It’s been pretty surreal so I’ve just been going along with it.”

For running back and defensive back junior Brandon Roberts, getting to hold a CIF title plaque was a second-time experience.

“All it is to me is another game,” said Roberts, who was on the 2018 Mater Dei team that won the CIF-Southern Section Division 1 championship before transferring to Sunny Hills. “Everyone on the team just kept grinding all season.”

Duxbury, who ended the night with 131 passing yards and two passing touchdowns, said that the championship was the pinnacle of his football career.

The title gives Karavedas his signature win since he joined the Sunny Hills program for the 2015 team that ended a 27-game Freeway League losing streak and five consecutive playoff berths.

“There are no shortcuts when you’re trying to build a program the honest way,” he said. “Our guys have put in a lot of work, building a house brick by brick. Tonight was a culmination of that work.”

The Lancers will travel to Bakersfield Saturday, Dec. 7, to take on the Eagles of Bakersfield Christian High School in the CIF State Division 3-A SoCal Regional at 6 p.m.

The Eagles beat Central Valley Christian 28-14 in the CIF-Central Section Division 3 final Nov. 29 to advance to the SoCal Regional.

“We’re going to get in the film room and work our butts off,” Roberts said. “We’ll be ready for [them].”