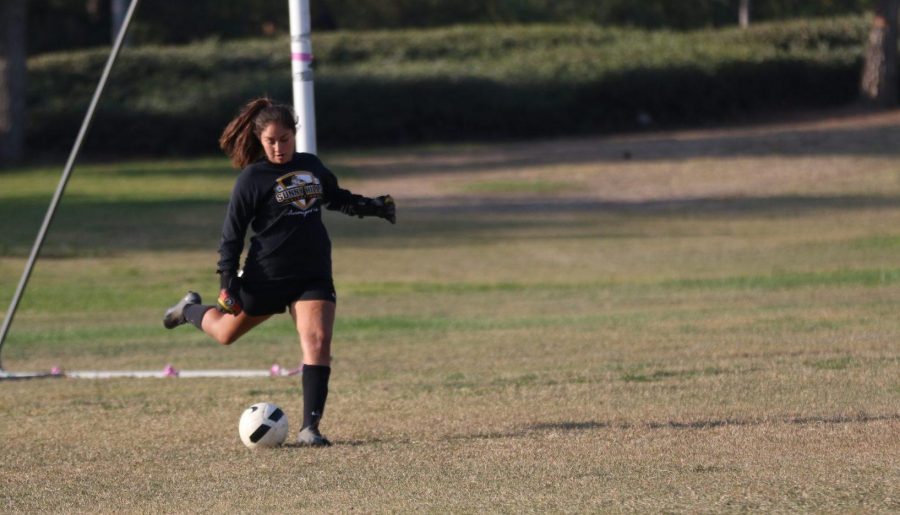 Junior goalkeeper Cil Avila kicks off the soccer ball during a goalkick in practice Nov. 7 at the field next to Hydroflow. Photo taken by Paul Yasutake

Outlook: The players have been training for two to three hours, three days a week in hopes of becoming Freeway League champions.

This is the team’s first year being in Division 1.

“Our goal this year is to win league and hopefully get another CIF championship,” center back Mehta said.

During practices, the team reviews set plays and practices many defensive drills like possession and shooting in order to simulate game-like situations.

On Wednesdays, the Lady Lancers’ team trainer comes in to help improve their speed and agility.

“To prepare, we have been training pretty hard,” defensive midfielder Ip said. “We have been trying to build up team chemistry and get back into our ‘season mentality.’”

The team’s biggest game is against Troy High School because it’s the game that most likely decides which team ultimately becomes the league champion.

“Troy is our biggest rival, but CIF games are also really important to us because if you lose, you get eliminated,” Mehta said.

Since his team reached the state CIF semi-finals last year, Gordon believes that he has a strong group of hard-working girls that can bring more success this year.

“We expect to win tournaments, league and CIF Championships,” the coach said.

The girls are practicing for their first pre-season games, which are coming up on Nov. 21 and 22 against Yorba Linda High School and Esperanza High School, respectively.

“We already [won] once, but that success wasn’t a choice,” Ip said. “This season, we’ll prove that we’re a good team and make it as far in Division 1.”