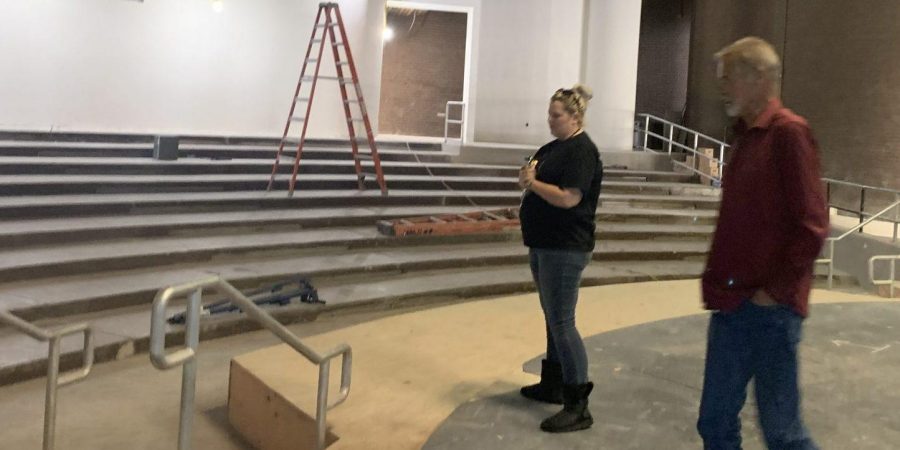 Theater teacher Amanda Gieser (left) and the site construction project manager survey the new stage extension during a recent inspection of the PAC, which has been closed since May for remodeling. Posted with permission from Melissa Stinson.

A previous version of this story had the wrong year for when Mr. Sunny Hills started. It has been corrected on March 5 in this version to show it was in the spring of 1995.

While school officials expect the Performing Arts Center [PAC] to reopen in early March, the ASB has decided to cancel the annual Mr. Sunny Hills program — a 35-year-old tradition.

“We [will not] have it unless it’s in the PAC,” the ASB co-adviser Mike Paris said. “There is not a time available [in the gym] that would work.”

Started in 1995, Mr. Sunny Hills has been an annual talent show pageant for senior boys; other seniors would elect nominees who would then decide whether to participate.

The ASB presidents from other district schools would judge contestants in areas such as talent and charisma to determine a winner.

Last year, it was moved to the end of fall semester because the PAC was scheduled to close that spring, though that didn’t happen until May.

Some seniors have expressed disappointment about the cancellation.

“I feel that they are robbing the senior class,” said senior Luke Duxbury, who found out about the cancellation from a friend. “The administration should have done more to find another place to do it because it could be as simple as using the Buena Park High School football stadium.”

Improv member senior Diego Cano hoped to incorporate improv if he were nominated as a contestant this year.

“I feel sad because I was looking forward to [participating] since freshman year,” Cano said after finding out it was canceled.

Meanwhile, the Bayanihan club’s annual Pilipino Culture Night [PCN] April 18 will be moved to the gym, like the Dec. 6-7 Dancing With the Staff event.

“We [scheduled] PCN in the gym rather than in another school’s PAC because we need a whole week of dress rehearsals the week of the show,” Bayanihan club co-president senior Kristen Del Mundo said.

The group will also not continue the tradition of projecting the colors of the Filipino flag onto a stage screen during PCN.

In the past, club members had scheduled two PCN performances — one during the day and the other at night. This year, only one performance will be held since the gym has more seats than the PAC, Del Mundo said.

As of Nov. 1, construction crews were working on extending the stage, assistant principal Melissa Stinson said.

The remodeled PAC will include LED lights that can be projected onto the stage instead of traditional light bulbs that must be changed by stage technicians using a ladder, principal Allen Whitten said, adding that the quality of the PAC’s updated equipment will rival a modern movie theater.

When a red light focusing on a certain area of the stage needs to be replaced by a blue one using traditional light bulbs, the bulb must be unscrewed and rescrewed, Whitten said.

Using the new LED bulbs, changing the color of a light can be as simple as pressing a button backstage.

The principal also said PAC renovations will include an improved sound mixing board, equal in quality to those in other professional auditoriums. This device will mix sounds from various sources into a single audio feed and will improve the quality of sound in the PAC.

“I can’t wait for our visual arts students to perform in the new [PAC] with light[s] and sound that [they] deserve,” Whitten said.

As part of the remodeling project, the new PAC will also meet the code for wheelchair access for the disabled. A lift will be added to the PAC to allow disabled students in a wheelchair to have access to the sound booth, Stinson said.

Previously, students who used wheelchairs were not able to use the recording studio.

Whitten said the renovations will also include more comfortable seating and new speakers. Along with these interior improvements, a new sign reading, “Sunny Hills High School Performing Arts Center,” will be painted outside the building.

Many organizations have had to make adjustments because of the PAC closure.

The Sunny Hills theater program, for example, is temporarily using the Buena Park High School PAC for its performances, and the music department currently practices in the cafeteria and performs in the gym.