Girls in eSports enjoy the game despite stereotypes 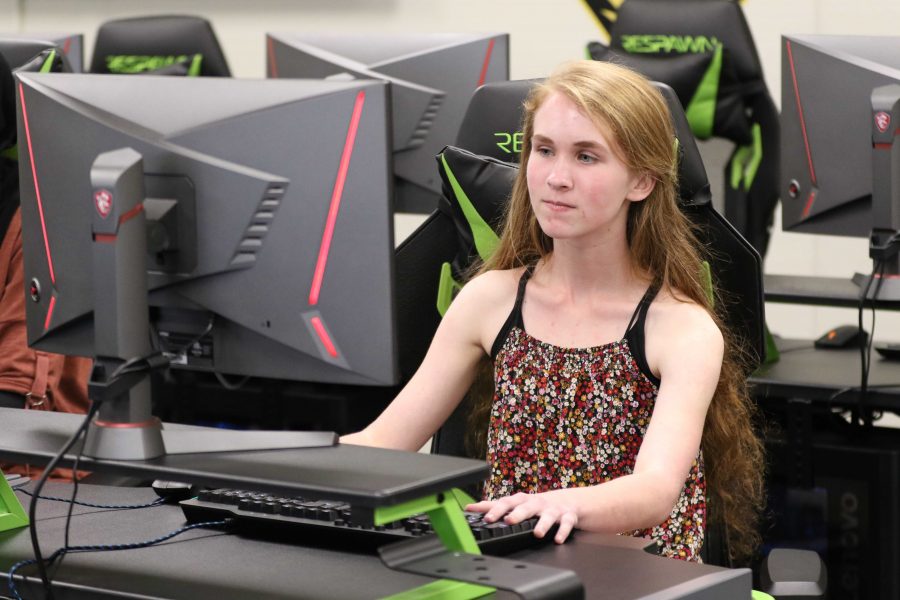 eSports club senior co-presidents Joseph Park and Gavin Sass gave their first club presentation of the year on Aug. 30. Senior eSports multimedia manager Serena Lee listened to the presentation attentively among a sea of eager, male gamers, while taking photos of the slides.

Lee is one of very few girls who are involved in the male-dominated activity of eSports.
In spite of the gender gap, Lee finds the ratio of boys to girls in the gaming industry to be unsurprising.

“[The gender gap] never really crossed my mind,” she said. “I [don’t think it really mattered to me] because it was to be expected, as none of my friends that were girls played any games.
Out of the 150 students who signed up for the Sunny Hills eSports club this year, only 11 were female according to the eSports club roster.

Lee has been a gamer since she was around 6 or 7 years old after growing up with two older brothers who influenced her into playing video games, and she now mainly plays League of Legends and Minecraft.
“My brothers played League when it was still new and blowing up, and watching them play made me want to start playing as well,” Lee said. “The first ever gaming console I had was a Wii, and I would only play Super Smash Bros. Brawl with my brothers.”

Besides Lee, freshman Katelyn Luong started playing games with her father and considers herself to be an avid gamer.

“When I was about 5 or 6 years old, my dad would play games with my siblings and [me],” Luong said. “He thought it was a good way to bond.”

Similarly, junior Aya Tarabay, who began gaming at the age of 10, also shares a common passion for esports.

“What drew me to gaming was just the rush of adrenaline I get from playing,” said Tarabay. “Plus, it helps me escape daily life problems by having fun in my virtual life.”

Lastly, freshmen Hannah Yaros began gaming at the young age of five after following her father to gaming stores where she would play on the test consoles.

“From then on, I’ve always been playing games which brought me to the eSports club to this day,” Yaros said. “I love to play games whenever I get the chance because it is an entertaining and bonding experience with friends and family.”

According to venturebeat.com, a 2018 report conducted by market research website Interpret found that women make up only 30% of the eSports audience. Despite the low percentage compared to their male counterparts, women’s viewership of eSports has actually increased by 6.5 percent since 2016.

“I know the gaming community is acknowledged to be much more popular with boys, and therefore, many girls can be intimidated,” Yaros said. “I notice other girls will even possibly stay away from these types of clubs because they don’t want to stand out.”

Though the numbers are considerably low for women in eSports compared to their male counterparts, the rate of women in the gaming field has been increasing over the past few years.
“Hopefully in the future, there will be more professional female gamers so that others [that aspire] to go pro can be inspired,” Lee said.

Even with the statistics that depict an immense gender gap, the results are expected—the gaming industry gained notoriety for its sexist culture and stereotypical views on women.

Lee believes these stereotypes and prejudices are unnecessary and overused.

“Stereotyping [might] be [a] funny banter between friends, but over time, it gets repetitive,” Lee said. “There are so many girls that just want to enjoy video games for the same reasons why guys want to play video – just let people have fun and do what they want.”

Despite these prejudices, Yaros feels little pressure as a female gamer.

“There shouldn’t be a need to worry about how other people will judge anyone’s passions or interests,” she said. “Stereotypes don’t really matter to me because I believe anyone has the free will to do what makes them happy.”

Being a female in eSports caused Luong to face some common misbeliefs, such as that guys are better than girls in gaming or that females are less-skilled at gaming compared to males.

“I think some common misconceptions about girls who play games are that they have no idea how to play and only say they do it to get attention or to stand out,” Luong said. “Most guys may not think this way, but [the] most [that] I’ve met do.”

Despite some of the hardships women have faced from their male counterparts in the gaming field, Park still encourages more girls to join the club. In fact, Park said having girls in the club made eSports a much more positive environment for fostering healthy relationships.

“eSports would significantly [change] if [more] girls participated in gaming,” he said. “Many people that are in the club really love to communicate with each other, so you have more opportunities to [make friends].”

“Don’t let what others think or say keep you from participating in the things you love,” he said. “My main goal is to make sure anyone who enjoys eSports is able to participate.”

Besides the active female members of the eSports club, more girls also play video games while being independent from the club at Sunny Hills for reasons other than sexism and stereotypes.

“I [mainly] didn’t join because I already have friends I play games with,” said junior Gloria Lee, who began playing video games at the age of 10. “I just felt like I didn’t need to, and playing video games is something I’m trying to refrain from playing too much, and going to a club that promotes video games wouldn’t be too ideal.”

Junior Rosemary Han also previously joined the eSports club her sophomore year but simply quit because of her inactivity.

“I joined last year, but I didn’t really do much, so I thought I wouldn’t continue my membership with them,” Han said.

Myra Deister, one of the advisors of the eSports club, attributes the reason for the gender gap to the nature of the gaming industry.

“Its [always been] geared toward guys—the games that they create and the games they play in a lot of these matches are “guy games”, and STEM has always traditionally been a men’s area,” Deister said.
Walter Haberaecker, eSports club’s other adviser, already sees change taking place within the gaming community.

“It’s not just that [the video game industry] will change, but were seeing a change already,” Haberaecker said. “Our school is a great example of this, [as] we already have female members on both of our varsity and junior varsity teams, and if you look across the industry, female players who are really, really good, are becoming more and more prevalent.”

With the overall increase in girls’ participation in video games, Lee views the future of females in eSports with optimism and high expectations.

“Because eSports has been taken more seriously in the past few years, it is becoming more diverse over time,” Lee said. “Although there [are] a lack of professional female gamers to get inspiration from, I believe that in the future, more females will be confident in their gaming skills.”

Deister also believes that more women in gaming will have a positive impact on the gaming industry.
“I think if we have more females in eSports and in the gaming industry, I think the types of games will either increase, where some can be more female oriented, or less violent, but still competitive,” Deister said. “That’s what I would like to see, and I’m sure there’s a lot of people out there that would like to see that too.”