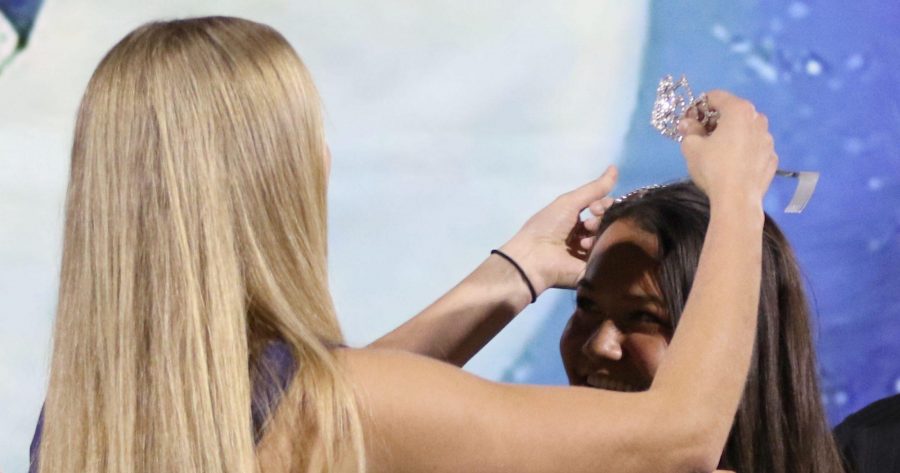 Senior Cece Hamby was named homecoming queen during halftime of the Oct. 4 football matchup between Sunny Hills and Sonora — the first time that the coronation was held at the modernized Buena Park High School turf stadium where the Lancers play their home games.

“I felt very grateful and shocked when I was announced,” said Hamby, who hours earlier chose her freshman brother J.D. to escort her during the Oct. 4 homecoming assembly in the gym. “This whole week was an experience that I will take with me throughout my life and look back on in the future.”

During the coronation ceremony, all five senior princesses were escorted by their fathers down the pathway onto the center of the field where arbor arches framed the backdrop of this year’s homecoming theme based on Peter Pan’s Neverland.

“As I was walking down onto the field, I was very nervous but excited when I heard the cheers,” Hamby said. “When I saw my friends and as I held onto my father, I couldn’t help but smile and enjoy myself even with all the nerves.”

Each princess’ name was announced to the stadium crowd by senior Jennifer Brezoi and Abby Kim while senior Evan Kim dressed up as Peter Pan to deliver the result based on voting among the Sunny Hills student body.

After Hamby’s name was announced as the winner, last year’s homecoming queen, Jessica Barrow, moved toward the center of the stage to officially transfer her title to the senior.

“I was able to grow as an individual and was able to face my fears and turn even the more challenging aspects into a more positive experience,” Hamby said after the coronation. “Throughout this whole experience, I was able to fully appreciate everyone who has helped and supported me throughout my high school life.”