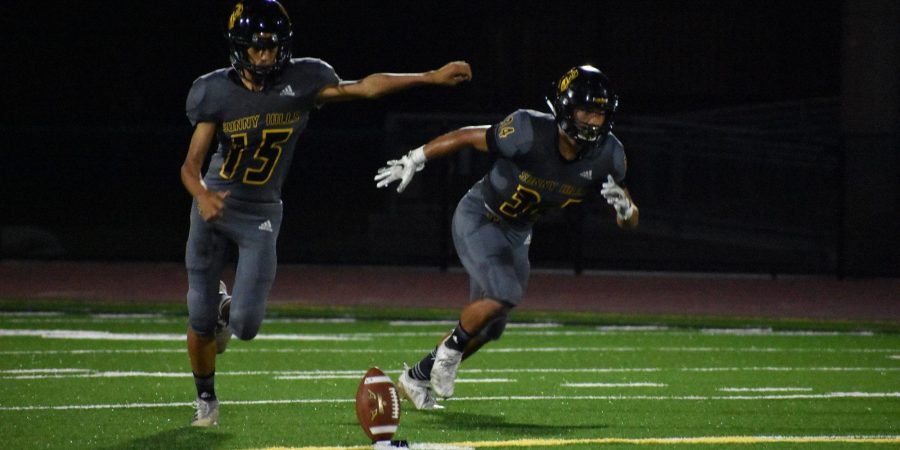 Freshman Mathias Brown (left) gets ready for one of his kickoffs during the Sept. 6 game against Irvine High School. Photo taken by Accolade photographer Paul Yasutake.

For freshman Mathias Brown, his status on the Sunny Hills football team all changed on one play — the second one of the first game of the 2019-2020 season.

That’s when senior Arnoldo Beltran got hurt trying to tackle an Aliso Niguel player while playing defense. The defensive back’s right wrist was broken, and he was done for the evening.

Beltran has also been playing kicker for Sunny Hills since his sophomore year, and so the only option head coach Peter Karavedas had was to turn to Brown, who plays kicker for the freshman football team and was brought along as the backup kicker that night.

“The first one I missed a field goal,” said the freshman, recalling his nervousness of playing in his first varsity game. “[My] teammates supported me, saying that it’s going to happen —  that I’m going to make mistakes; you just got to get over it.”

And get over it he did.

Since that Aug. 30 Aliso Niguel game, Brown has gone 2-for-3 in field goal attempts without missing any point after tries.

“Mathias is the best one,” said Karevadas of his freshman kicker, the first one he has brought up to varsity since he first started coaching at Sunny Hills in 2014. “Kicker is not a position where your physical strength isn’t a huge factor; he’s not tackling anybody or blocking anybody, and the fact that he’s younger and maybe even smaller than some of the guys doesn’t hurt him.”

A soccer player since the age of 5, Mathias Brown was playing for the Pateadores Academy — a U.S. soccer development program — when he was encouraged to also try out for the freshman football team.

The Singleton family then watched as Brown successfully kicked a 45-yard field goal, which is nearly halfway across the field.

“My dad thought Mathias would be a really good kicker for football since he kicks really well,” Brian Singleton said.

The dad then contacted head freshman football coach David Wilde the same week and suggested that Wilde come watch Brown kick. After seeing his potential, he was considered for the kicker position on the freshman team, Brian Singleton said.

“His performance has been great, especially for a freshman kicker,” Wilde said. “He’s been really consistent, and he has a really powerful leg, and obviously his leg is good to kick on Friday nights with kids that are three to four years older than him.”

Wilde eventually alerted Karavedas about Brown earlier this summer, and they decided that the varsity and freshman teams needed a kicker for the season, and because of different practice schedules and game days, Brown was able to play for both teams.

Though Beltran has been sidelined because of his injury, he said he has been giving Brown advice, especially since Karavedas sent him to a summer kicking workshop every Sunday for six sessions at Aliso Niguel High School.

“They taught us that when you aim, you’re supposed to be looking down and not up because you end up kicking somewhere else,” Beltran said. “[Brown and I are] pretty close, and I’ve been teaching him ways to kick.”

Since Brown took over the varsity football kicking duties, the longest field goal he has made during a game has been 37 yards, while during practice he has been able to make a field goal from 53 yards away.

Besides kicking field goals, Brown said his goals for this year are “to be an inspiration and make my family and friends proud.”