Students stick to their style in decorating their school gear 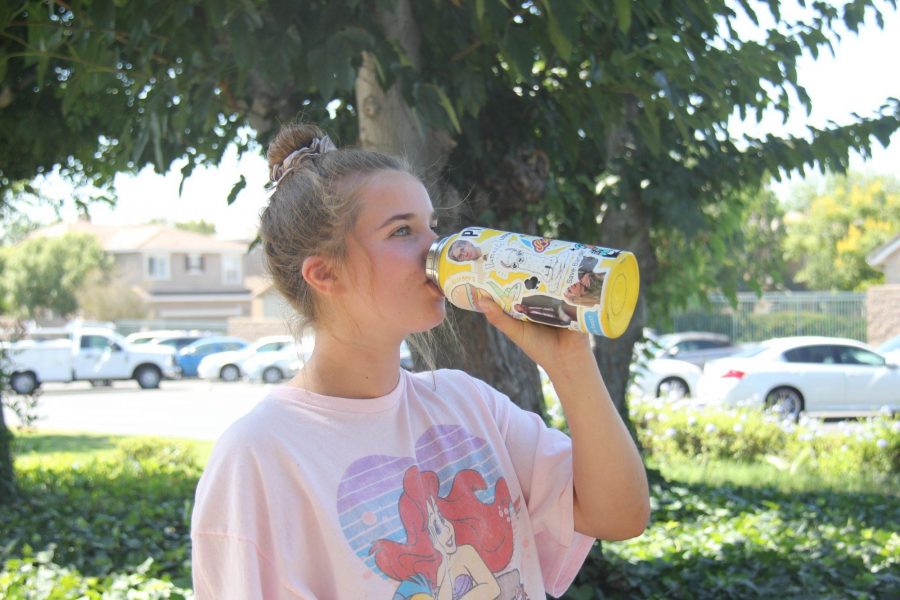 It was February this year when sophomore Malini Pandey decided to decorate the top cover of the Acer Chromebook that she had checked out from Sunny Hills High School.

Pandey picked up two vinyl labels on a table for free during her visit to the Junior State of America conference at the Sheraton Gateway Los Angeles Hotel.

“When I saw the [two] stickers that I picked up, I was like, ‘Oh I really agree with this; I should take these ones,’” Pandey said.

Days after the convention, she decided to put the “Socialism Sucks” sticker on her Chromebook because she thought her Chromebook looked bland, and it was too big to fit her personal laptop.

Pandey is one of many Sunny Hills students who have followed a recent trend of decorating  Chromebooks, water flasks and binders with stickers to either express their personality and interests or just for fun.

Junior Jenna Beining said she took up the trend six months ago when she saw her peers walking around Sunny Hills carrying Hydro Flasks with colorful designs on them. She saw stickers with various sizes and shapes, some about sports and others about travel locations.

Beining then spent $50 on 21 stickers that she ordered on redbubble.com, an app that sells products individual artists design. Upon their arrival by mail, she splattered all 21 stickers on her yellow, 30-ounce water bottle.

“I like that I can show different parts of my fun and outgoing personality,” she said. “For example, I have a sticker of a dancing polar bear and a radish that says, ‘You’re so rad!’ on my Hydro Flask.”

Since the start of this school year, Beining had many of her friends comment about her stickers.

“I think it’s interesting to see how people react and which of my stickers they like,” she said.

Some have taken to designing the inside of their school-related supplies, like the area next to the cursor pad of the Acer Chromebooks.

Sophomore Diya Patel was inspired by pictures of sticker designs on her Instagram and Pinterest explore page.

“I just had some stickers from different brands like Vans and Patagonia lying around so I put those on,” she said. “I like putting them on because I feel like my Chromebook’s very plain.”

The vinyl design trend is not just solely for girls.

Junior Kyle Kang has different types of stickers that symbolize his interests in many things.

“I like having stickers because it adds uniqueness to my Hydro Flask instead of being plain,” he said. “Some of my stickers show what I do outside of school.”

Though decorating Chromebooks with stickers doesn’t violate any school policy, administrators hope students will think twice before they do it.

“Even though the plan is for students to keep their Chromebooks for the entire four years, a lot of students come and go,” principal Allen Whitten said. “They have to turn it back in without the stickers, so we prefer not to have it on the Chromebooks.”

In addition, the reaction to students’ designs has not always been a positive one.

Pandey had two specific experiences in which she had to re-evaluate her use of labels.

A substitute teacher in her freshman Honors World History class looked at her “Socialism Sucks” sticker and started to talk to her class about it.

“That made me feel really uncomfortable because I didn’t like being singled out in class,” Pandey said. “I don’t think she really understood my interpretation of the sticker based on the things that she was saying to me.”

The ASB co-adviser, Mike Paris, also pointed to another of Pandey’s stickers on her Chromebook that read, “Kamala Harris for president 2020.”

“I felt really embarrassed, and I didn’t want my political views to impact [his] thoughts about me,” she said.

She later took that one off because Pandey no longer agreed with Harris’ viewpoints and overall campaign. But she remains adamant about keeping the others on her Chromebook.

“In the end, I decided not to take the [other] stickers off,” she said. “If these are my opinions, and I’m not open to sharing them, or if I’m not proud of my views, then it’s not really a good thing.”

Pandey predicts that this trend will not end anytime soon because her peers will never lose interest in expressing themselves.

“I think [the trend] might extend to backpacks and other accessories with buttons and stickers because people want to express themselves and want their opinions to be heard through creative means,” she said.