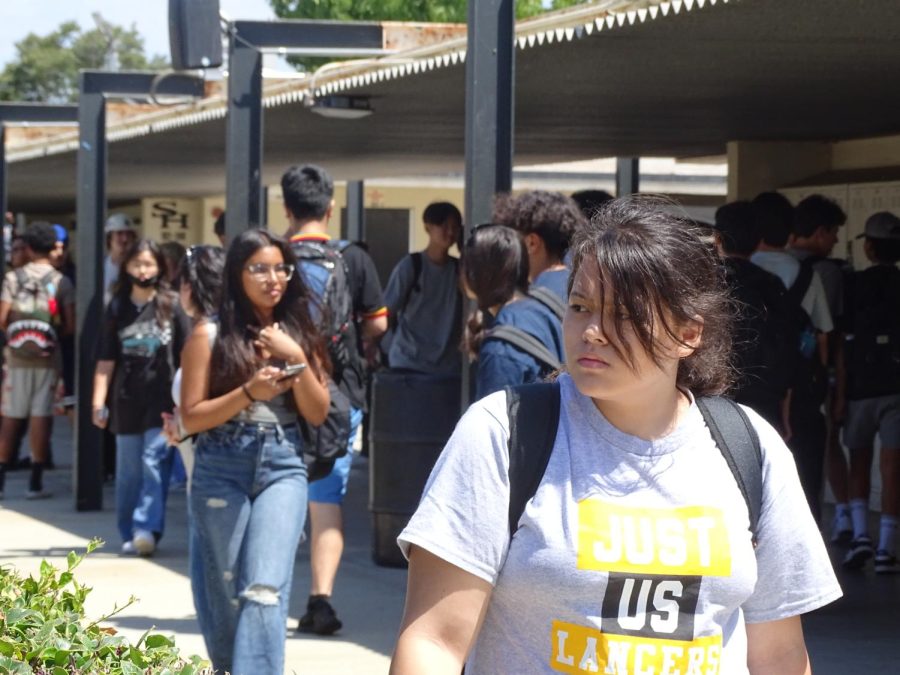 On the first day of school, students make their way through the 80s building hallway during lunch, which occurs before break because of the new bell schedule. To meet a recently passed state law, all public high schools starting this school year have to start no earlier than 8:30 a.m. – zero period exempted.

On the first day of school back on campus for the 2022-2023 academic year, students and faculty members expressed conflicting opinions regarding the school’s newly adjusted bell schedule.

“Anytime there’s change, you’re going to get both sides of things,” principal Craig Weinreich said. “We had some staff members that were very positive about it and others that obviously didn’t like it, but unfortunately, we had to follow the law and figure out how to make it work best for us.”

Based on Senate Bill 328 that Gov. Gavin Newsom signed into law in October of 2019, the provision gave California public high schools a three-year window – until July 1, 2022 – to revise their bell schedules to start first period classes no earlier than 8:30 a.m., zero period exempted.

For all schools in the Fullerton Joint Union High School District, that meant the last period of the day – period six – would end at 3:30 p.m. Faculty and staff here voted last year for the current bell schedule in which a 30-minute lunch starts first at 11:36 a.m. followed by a 15-minute break that begins at 2:12 p.m. (The teachers interviewed told The Accolade they didn’t remember whether they voted in favor of this current version.)

Newsom’s decision to approve the legislative-backed bill meant that he agreed with recent findings that teenagers are more awake and alert closer to 9 a.m. when adults usually start their work day than at 8 or 7:30 a.m. when school days used to start in the past.

“Every student is different and there is not one schedule that is best for everybody,” math teacher Kari Morita said. “However, overwhelming statistics show that teenagers are not getting their recommended 8-10 hours of sleep a night, so although I do not think this is a cure-all, it is research backed, and it should help most students.”

Although the state law only affects first period classes, school faculty members voted to delay all classes including zero period sessions. For students like junior Isabella Jacobs who are enrolled in a zero period class, the 7:27 a.m. start time compared with last school year’s 6:55 a.m. may initiate benefits including more time to eat breakfast.

“I think even just a little later of a starting time will give people, especially people with zero periods, a little more rest and time in the morning,” said Jacobs, who is in her second year of taking a zero period class. “I notice that I wake up later and have time to do more things, [and] getting up super early last year for zero period was really rough, so I’m glad it’s a little later now.

Sleep has always been an important part of the day for Morita, who teaches her first class during third period at 10:38 a.m., in part to prioritize her sleep schedule.

“Even in the past, I haven’t had a zero or first period anyway, so I’m not quite as rushed as other teachers even prior to the schedule change,” Morita said. “But I’ve enjoyed the extra time in the morning by trying to do some extra stretching or a morning meditation, and honestly, I’ve been loving it.”

However, given the 30-minute delay in first period start time, some students have expressed their concern for extracurricular activities that may be put off until later in the evening.

“With school ending later, I think it’ll be a challenge for many students with after-school activities to find enough time to do everything they need to, especially when they will go home at a later time than usual,” the Associated Student Body [ASB] activities committee member junior Arum Han said. “I prefer last year’s schedule because I personally like waking up early and leaving school at a reasonably early time.”

Although senior Roman Ruedas said the new schedule allowed him to reserve more time toward his sleep, he also believes that the modified release time is not in his favor.

“I think I prefer last year’s schedule because if I didn’t have a sixth period, I would be able to leave earlier than we are to now,” Ruedas said.

“When we move the schedule, we push teachers into that 5 o’clock traffic, and the same goes for teachers who are pushed into the morning rush,” Zubko said. “I definitely think this schedule has the possibility of creating more stress on teachers who have to travel longer distances.”

For English teacher Tom Wiegman, who lives nearly 20 miles away from school, evening traffic is a cause for concern for him on the drive home.

“I come at the same time in the morning, so it doesn’t make any difference,” Wiegman said. “But because we leave much later in the afternoon, evening traffic is much worse.

“I wish that state legislators had just left it alone and let school districts have the flexibility to set those things on their own.”

Spanish teacher Gene Bordy said that he feels especially fatigued during the later half of the day — more than he normally would with the old schedule.

“I’m fortunate that I don’t live very far away, so traffic isn’t a big concern for me,” Bordy said. “However, physically, it feels a little bit more tiring, and I think if we could’ve kept the schedule where we end at 3, I would have liked that a little better.”

But for athletes like sophomore Jamie Lee, having lunch before break is an additional benefit to the school’s schedule adjustments — especially for those who would rush their meals or skip out on lunch entirely.

“I find this beneficial since they changed the periods so that athletes like me can take their time to eat instead of rushing our lunch in a span of 10 minutes, compared to what had to be the case last year,” Lee said.

For club meetings that typically occur during the lunch period, the schedule modification may bring shifts in on-campus group involvement that will begin early September.

“Since less athletes are leaving, I think there will be more people in clubs because they have nothing to do or nowhere to go,” Girls Empowerment club vice president sophomore Venice Hong said. “Last year not a lot of people came because it was later in the day and a lot of people were tired”

In previous years, the ASB class occurred during fifth period to coincide with lunch activities. With the new bell schedule, the student body received administrative approval to continue the practice of having ASB right before lunch.

“Because we have lunch between third and fourth period, ASB is able to host more lunch events where everyone is included,” Han said. “Last year, many students left during lunch because they didn’t have a sixth period, but now that almost everyone has a fourth period after lunch, it’s a great opportunity to do more inclusive events during lunch.”

With this modification in break and lunch times, Han expects higher participation in the school’s future leadership-coordinated activities — one of which includes this week’s three-day Club Rush event.

Some students, however, expressed their disapproval for lunch that starts at 11:36 a.m. compared with last year’s 1:24 p.m. — a nearly two-hour difference.

“It’s not too big of a change I suppose, but it also can confuse you like personally I never really ate food at break last year, so I don’t do it too much this year because I forget it’s lunch and just hang out with my friends,” junior Christiopher Arredondo said. “When it’s actually break, I get hungry, but there isn’t much time to grab lunch because it already passed.”

Based on an online Accolade poll of more than 162 responses, a 35% majority voted in favor of just the 8:30 a.m. start time, while 17% preferred the old schedule with break before lunch compared with 5% who like having lunch first.

“Having lunch after third period is weird to get used to, but personally, I don’t like it because that’s not a normal time to have lunch,” senior Ryan-Jayson Evalle said. “I prefer last year’s schedule more because lunch was at a normal time.”

Despite the difference in sentiment, some have concluded that it is far too soon to give a final verdict on the new bell schedule, insisting instead on giving more time for everyone to adjust to the change.