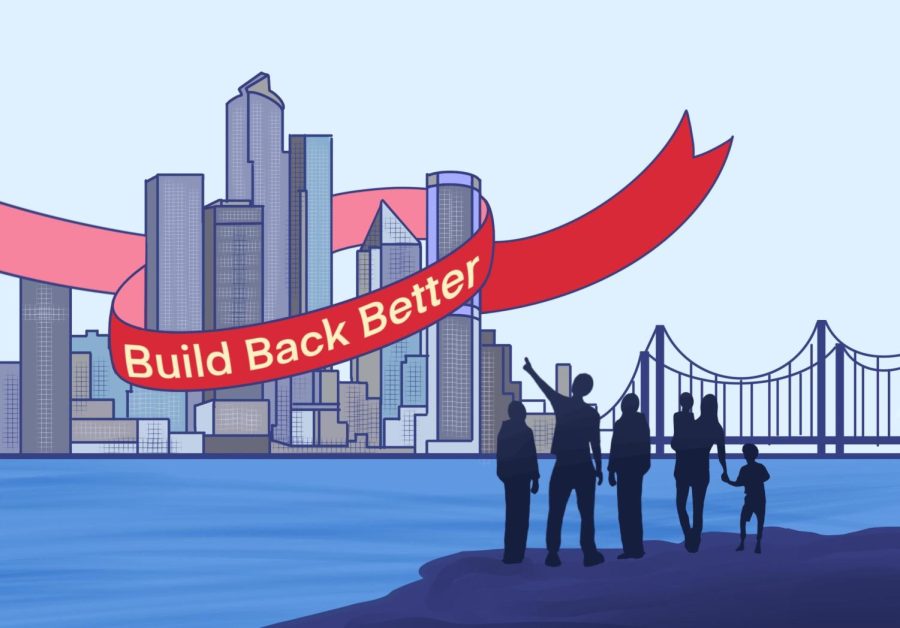 The House of Representatives passed the Build Back Better Act Nov. 19, 2021 with the hopes of rebuilding the middle class and mitigating climate change. Disagreements within the Democratic Party, however, stall the bill from passing into legislation.

Passed by the House of Representatives Nov. 19, 2021, the Build Back Better Act allocates billions of dollars to expanding job opportunities, rebuilding the middle class, investing in children’s education and caregiving and other significant provisions.

“[The bill] is something that we have been needing to do in this country because we’re behind when it comes to other parts of the world,” social science teacher Greg Del Crognale said.

THE BILL’S EFFORTS TOWARD CONSERVATION

The Build Back Better Act will bolster conservation efforts by launching projects to build wind turbine blades, solar panels and electric cars using American steel and other domestic material, according to whitehouse.gov.

Within the bill lies a $60 billion project dedicated toward encouraging the purchase of electric vehicles with tax credits, and Del Crognale views such an investment as a large stride taken toward environmental efficiency.

“[Implementing tax credits] is kind of a big one and more of a long term deal,” he said. “It would mean that you probably have more people willing to purchase electric cars rather than purchasing oil, gasoline cars that are more polluting.”

Before learning of the Build Back Better framework’s incentivizing project, senior Tomás Soh, who has yet to get his driver’s license, planned on purchasing a hybrid, gas car like his mother; however, upon learning of Biden’s multi billion project, he shifted the vision for his future car.

“Now that I think about it, conserving the environment is a top priority that more people should get into the habit with,” Soh said. “The tax incentive gives me more reason to reconsider my decision for sure, because it will be one way for me to easily practice conservation.”

THE BILL’S RELEVANCE TO SH STUDENTS

The Build Back Better framework aims to evenly distribute high-quality education beyond high school to low-income students and DREAMers — an immigrant youth who qualifies for the Development, Relief, and Education for Alien Minors [DREAM] Act, according to americasvoice.org.

To fulfill such a promise, the act will increase the maximum Pell Grant — a subsidy the U.S federal government provides to students in need of a college tuition — by $550 to $7,045 for the next three academic years.

“This would lift a load of weight off of those who are struggling financially, so this is extremely helpful to them,” junior Brigham Catota said. “It will be easier to receive the education that people want so that they can pursue their career goals. The more people that can meet this goal, the better, as it will result in a better quality of life for people in general.”

Though not a DREAMer or low-income student himself, Brigham votes in favor of the bill’s passage, so his bright, yet low-income peers can apply to colleges otherwise a distant dream without the increased grant.

Cafeterias handing out free or reduced-price lunches close their doors with the closure of the school year; however, the children relying on such meals cannot simply close the door to nutrition hardship. The bill proposes to invest in nutrition security year-round, not just the school semesters.

According to whitehouse.gov, the federal government will expand free school meals to 8.7 million children during the school year and provide a $65 per child per month benefit to families of 29 million low-income children to purchase food during the summer months.

Brigham often picks up the free lunches offered by the school after fifth period, and though not for financial reasons, he thinks of the framework’s proposal as a productive, beneficial idea for the youth.

“Children shouldn’t have to deal with the burden of buying themselves food for lunch at school,” he said. “Even if the consequence for this action would be the spending of a rather large sum of money, the end result would be the nourishment and the well being of children who need it.

According to Health Affairs, 220 of the 221 Democrats in the House of Representatives voted for passage of the $2.27 trillion bill, with only one liberal joining all of the Republicans in voting against it. The bill, according to the Congressional Budget Office, will result in a $367 billion net increase in the nation’s budget deficit within the next 10 years.

“I think that the overall practicality of this large sum depends on whether our government will be faithful in executing this bill,” said sophomore Kasey Lee, who serves as the Director of Fundraising and Activism for the Sunny Hills Junior State of America [JSA] club. “So I’m really hoping Biden follows through with what he has planned.”

Congress will fund the Build Back Better Act by utilizing savings from the repealed Trump administration’s rebate rule and monetary support from the nation’s large corporations and upper class.

Even with the hefty cost, Lee views the Build Back Better Act as an implementation necessary to secure environmental safety.

“The more these climate change activities are delayed, the more it will cost us financially and socially in the long run,” Lee said. “Unfortunately, these funds and projects won’t immediately solve our world’s environmental concerns, but it’s relieving to know that our politicians are trying to make an effort to bring change to our environment.”

To advance the Build Back Better Act past the Senate, the Democratic Party requires the support of all its 50 senators to overrule the 50 Republican votes against the suggested legislation — vice president Kamala Harris holds the tie-breaking vote.

West Virginia Senator Joe Manchin and Arizona Senator Kyrsten Sinema, however, stand as the only Democrats of their party against the bill.

Rather than funnel such a hefty sum of money into internal improvements, Manchin advocates for Congress to invest the time and money toward paying the nation’s growing debt. He holds concerns over the bill’s demanding finances and potential to spark inflation.

Sinema, another adversary of the Build Back Better Act, opposes raising income taxes for the upper class, thereby contributing to the forestallment of the act’s approval in the Senate and sinking any effort made toward bipartisanship.

“Bipartisanship means that you have both Republicans and Democrats vote for it, so the idea of having two posing groups in favor of something is usually a good thing because it means they’re compromising,” Del Crognale said. “In a democracy, you want compromise to occur.”

With no Republican support in the House of Representatives, Del Crognale does not view the Build Back Bill Act as a substantial step toward strengthening the nation’s bipartisan system.

According to a new UC Berkeley Institute of Governmental Studies poll co-sponsored by the Los Angeles Times, nearly two-thirds of Los Angeles voters say extreme heat poses a serious threat to public health and safety. 8 in ten voters say the same about the air pollution caused by the use of oil and natural gas.

Members of the SH community share such an outlook and express an urgent need for the passage of the Build Back Better Act to prevent further environmental destruction.

Catota, who joined the SH Eco Club several months ago, views climate change as a global concern pressing enough to sacrifice adding to the national debt.

“I think, or I hope, that if there is so much money being spent on the bill [then] it can really only produce a good outcome,” Catota said. “Yes, it will put us in a lot more debt, but the benefit is too great to lose out on.”

Like with any legislative bill, Americans will not perceive immediate effects in their surrounding environment; despite such a fact, Catota still supports its enactment and encourages his peers to patiently do the same.

“The long wait doesn’t make me less inclined to support it because any project that is this big is going to take years to take place,” he said. “As long as the government is constantly working toward this effort, then I’m all for it.”

Del Crognale, too, acknowledges the inconvenient timeline of the Build Back Better Act, but he sees its efforts as necessary for the development of the nation, even with the several years Americans may have to wait through.

“I think in the long run, [the bill] should be a really good thing because it’s again something we’ve been needing in this country,” Del Crognale said. “[America] used to be the best, but then we didn’t do anything for 50 years, and now we have to catch up again.”