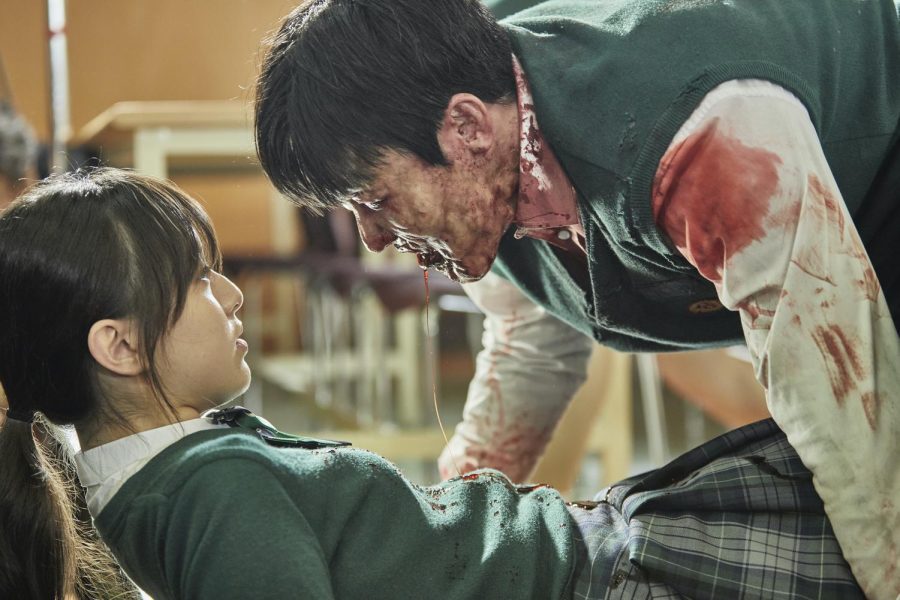 Image used with permission from Netflix

One of the protagonists played by Jihu Park, Nam On-jo (left), tries to escape from her first encounter with a zombie at her high school in Hyosan, South Korea, in Netflix's latest South Korean import following the highly successful "Squid Game." Since its initial release on Jan. 28, "All of Us Are Dead" made its way to No. 1 Netflix U.S.’s Top 10 list.

Enchanting viewers with the perfect amount of gore and heartbreaking scenes exposing corruption within society, the South Korean-produced Netflix series, “All of Us Are Dead,” brings the standard thrills of a zombie film while also blending in serious topics.

Director Lee Jae-Kyu (“The King 2 Hearts”), who previously led the production of “Train to Busan,” will surely catch the attention of Netflix’s younger audience by shifting the setting from a metropolitan city and a rail transportation to a high school revolving around teenagers’ escape in this horror-thriller installment.

Based on the 2009 Webtoon series of the same title, “All of Us Are Dead” also features the co-directing duty of Kim Nam-Soo. Their collaborative efforts have led to their feature landing at the No. 1 spot on Netflix U.S.’s Top 10 list only a week into its Jan. 28 release.

The hit follows the mega numbers from another series based in South Korea with an all-Asian main cast, “Squid Game,” which Netflix subscribers have watched 1.65 billion hours of only 28 days after its Sept. 17 release.

But unlike “Squid Game,” which contains nine episodes, this series adds three more, each lasting about an hour. While the zombie show plays in the original Korean language, Netflix subscribers have the option to turn on English subtitles or English dubbing.

The first episode begins in a foreboding atmosphere: The rain drizzles weakly onto the cement as street lights flicker in the dark night sky. The camera zooms in on a small group of people huddled together — from which a thin line of smoke drifts into the air.

These people turn out to be high school bullies taunting and abusing a fellow student, Lee Jin-Su (Lee Min-Goo), on the rooftop of a building in Hyosan, South Korea.

After receiving several blows to his body, the victim, in his rage, attacks the perpetrators, and for a split second, his body seems to contort with zombie-like movements. Jin-Su lunges at his bullies with unusual ferocity, but toward the end of this tense brawl, a final blow from the gang throws him off the building.

The introductory scene sets the foundation for the outbreak of the mysterious zombifying virus and foreshadows the villainous uprising of one of the bullies, Yoon Gwi-Nam (In-Soo Yoo, “At a Distance, Spring Is Green”).

Shortly after, the main leads can be seen making their way to the nearby Hyosan High School, a routine that doesn’t differ from any other school day.

Nam On-jo (Jihu Park, “The Witness”) and Lee Cheong-san (Chan-young Yoon, “Do You Like Brahms?”) grew up in the same apartment complex as next-door neighbors and share an inseparable relationship as childhood best friends. From the first episode, viewers notice Cheong-san’s obvious one-sided love for On-jo, who shows romantic interest for a different classmate Lee Su-Hyeok (Park Solomon, “Sweet Revenge”).

But this love triangle becomes the least of the students’ worries with the reappearance of a fellow student, Kim Hyeon-Ju (Jung Yi-Seo, “Snowdrop”), who had been reported missing for a day. Hyeon-Ju, covered in blood and strange bruises, claims the school’s science teacher Lee Byung Chan (Byeong-Cheol Kim, “SKY Castle”), held her hostage before collapsing on the floor in front of her concerned peers.

Hyeon-Ju, driven by a desire to eat human flesh, infects the school nurse by biting her hand. The situation quickly escalates, and by the end of the first episode, On-jo, Cheong-san and their peers find themselves trapped in a classroom surrounded by zombies. They must find a way to escape the school which is, at this point, infested with the undead.

With perfect ensemble acting from veteran actors and actresses like Lee Yumi (“Squid Game”) and Bae Hae-Sun (“Happiness”) and rising rookies like Yoon Chan-Young and Choi Yihyun (“School 2021”) paired with gory makeup bringing the zombies to life, the show will keep viewers sweating in anticipation.

The series not only shows the terrifying reality of a city consumed by an unknown virus that turns people into monsters, but it also reveals the multi-faceted problems that get swept under the rug.

From teen pregnancy to extreme bullying, the series focuses on hard-to-swallow topics that force adults and teens to reflect on societal flaws, setting it apart from other shows of the same genre.

For example, at the beginning of the series, viewers see a student named Park Hee-Su (Lee Chae-Eun, “Soon-Yi”) leaving the school’s infirmary to give birth in a public restroom – alone. Though Hee-Su eventually falls victim to the virus, she manages to rest her baby in a safe space just moments before her grotesque transformation. Credit goes to the co-directors for making viewers at this point to stay tuned to what happens to the newborn.

By giving viewers a look into Hee-Su’s silent pain, the show successfully addresses the harsh situations teen mothers face and the lack of a proper support system for students like her; even in a world void of blood-thirsty monsters, teens like Hee-Su have no one to turn to or lean on.

The theme of a weak foundation and lack of a proper support system for students extends to the scenes of bullies who prey on their victims with no repercussions, much like the face-off between Jin-Su and the gang of bullies in episode one.

Throughout the episodes, countless deaths and zombie encounters carry out the overarching theme of adults failing the youth.

The situation of students being trapped within the school with no help to turn to also parallels the April 16, 2014, sinking of the Sewol Ferry — a tragedy in South Korea that cost the lives of 299 passengers, 250 of whom were high school students on their way to Jeju Island.

Many viewers, especially those who are Korean, may speculate that the directors paid tribute to the victims of this tragedy through this film. While the directors have yet to say whether these speculations are true, several online articles, such as the Feb. 3 one published by Insider, make comparisons between the show’s plot and the 2014 tragedy.

Countless scenes throughout the episodes feature symbols of the ferry’s sinking — one of which being when fellow classmates tie yellow ribbons to the branches of a tree in memory of the students who fell victim to the virus.

This directly references the “Yellow Ribbon Campaign,” which began in 2014 when parents and classmates hung yellow ribbons to trees and posts in remembrance of the students who couldn’t escape the sinking ship. It once symbolized hope for the passengers’ safe return in 2014 but now lives on as a symbol commemorating the victims of the tragedy.

Those watching the film can expect to feel the disappointment and hopelessness the students of Hyosan High School feel, which reflect the same despair and desperation of the students aboard the Sewol Ferry as their ship sank into the ocean.

With unconventional perspectives and intense action shots, “All of Us Are Dead” is rated mature and brings fun, adrenaline and depth to the audience.

By the time viewers reach the last episode, they’ll likely be “dead”-icated to streaming any sequel or prequel to come should the producers move in that direction.